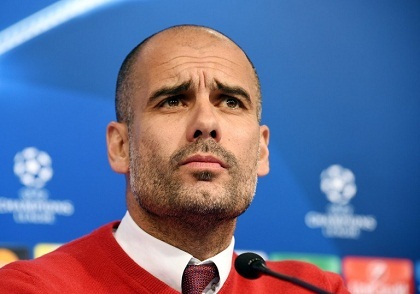 Pep Guardiola says Manchester City deserve an apology after successfully overturning their European ban but rival managers Jose Mourinho and Jurgen Klopp criticized the ruling by the Court of Arbitration for Sport.

CAS on Monday lifted a two-year ban imposed earlier this year on the Premier League club by European football's governing body UEFA over alleged breaches of Financial Fair Play (FFP) rules between 2012 and 2016.

Guardiola feels the club proved their innocence after years of accusations related to their financial strength and says it is time for others to accept their place among the elite is merited.

"I am incredibly happy for the decision. It shows all the people said about the club wasn't true," the City boss told a pre-match press conference.

"We should be being apologized to," he added. "If we did something wrong we would accept, absolutely, the decisions from UEFA and CAS."

The City boss has hit out at rival clubs for what he believes was a "whispering" campaign to discredit them.

"We don't expect Liverpool, Tottenham, Arsenal, Chelsea or Wolves, or all the clubs, to defend us but we have the right to defend ourselves when we believe what we have done is correct, and three independent judges said this," he said.

Tottenham manager Mourinho said the court's decision was a "disaster" and showed FFP, which limits club's spending in line with their revenue, was now dead, while Liverpool boss Klopp said City's reprieve was a bad day for football.

City were punished by UEFA in February over "serious breaches" of FFP regulations but immediately contested the ban.

CAS found that City had failed to cooperate with UEFA authorities but said the club "did not disguise equity funding as sponsorship contributions."

UEFA recognized in a statement that many of the allegations fell outside the five-year time limit in its own regulations.

An initial fine of 30 million euros ($34 million, £27 million) imposed by UEFA was reduced to 10 million euros by CAS. However, the fine related only to City's failure to cooperate with UEFA's investigation rather than FFP breaches.

Mourinho said if they were guilty, City should be banned -- but if they were innocent, they should not have to pay a penny.

On Wednesday, Tottenham face Newcastle, a club that could benefit from any relaxation of FFP rules should a Saudi-backed takeover be approved by the Premier League.

And Mourinho believes that in light of the City decision, any prospective new owners will not feel the need to comply with the regulations.

"I truly believe FFP is gone," he added. "New owners will have this feeling the circus opened the door so let's go and enjoy it."

Klopp is hopeful that City's participation in next season's Champions League will help his side's chances of retaining the Premier League.

But the German believes any demise of FFP, which has helped bring down debt across the European game, would be bad for football.

"From a personal point of view, I'm happy Manchester City can play in next season's Champions League, because if they have 12 games less, I don't see any chance for any other teams in the Premier League," said Klopp.

"I don't wish anything bad on anyone but I don't think it was a good day for football. Financial Fair Play is a good idea and it was there to protect teams and the competition, and clubs have to make sure the money they want to spend is from the right sources."