Justice Minister Hits Back after Fadlallah Lashes Out at Her 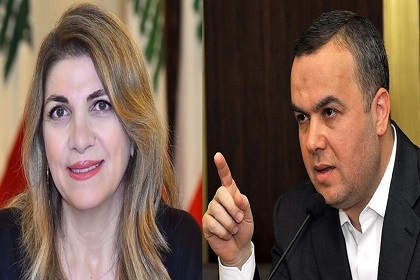 “Two months ago, the Justice Minister received 10 corruption files along with their documents and papers, which we had previously lodged with the Parliamentary Administration and Justice Committee,” said Fadlallah in a statement.

Noting that the files include details about around $31 billion in embezzled public funds, the lawmaker lamented that the minister “has not answered or taken any measure.”

“It seems that the minister’s priority is to sign urgent decisions with unjustified selectivity,” Fadlallah charged.

Najem hit back in a statement, saying the MP did not send files and documents but rather “a paper containing a list of some reports that are filed with the public prosecution.”

“It was followed by two additional lists yesterday and today, and the minister immediately sent a memo to the public prosecution to inquire about the fate of these reports,” the statement added.

“The MP’s suggestion that the minister bears the responsibility for not taking measures over these files is a legal mistake, seeing as the jurisdiction for investigations and announcing results belongs exclusively to the competent judicial authorities according to the applicable laws,” the statement said, noting that “the minister does not interfere in the details of the judiciary’s work in line with the principle of the separation of powers.”

But Fadlallah snapped back at Najem, saying that “instead of addressing her negligence, she is insisting on fallacies.”

“It seems that she has forgotten her main profession, although she was reminded several times by those who are more experienced than her in the profession and at the ministry of the need to read her jurisdiction very well,” the MP added.

“For information: reports are a legal measure used when the judiciary does not act automatically. The files that are in the minister’s hands had witnessed investigations and some had witnessed lawsuits, and it is the minister’s legal duty to answer MPs about the outcome of these investigations and the fate of the stolen billions,” Fadlallah emphasized.

Let me guess: There is not one single shia among the corrupted in his list. Perhaps a exeption if there is an anti-Hezbollah-shia that he can throw some dirt at. Apart from that, Fadlallah seems to have a problem with a female minister ("she was reminded several times by those who are more experienced than her in the profession").

Why must you go sectarian. One can say because they are Christians she is not going to look into it, based on your argument. What makes more sense is that he gave her a file of BS paper and is playing to the sheep, actually they both are.

Absolutely, either way its secterian, unfortunately.

Marie-Claude Najm was a professor at the faculty of Law and Political Science of Saint-Joseph University (Beirut, Lebanon) and an attorney at the Beirut Bar. She specializes in private international law consulting and founded her own practice in 1998. Najm has conducted extensive research on multi-religious societies and international situations in which civil and religious laws are in conflict. Her PhD thesis on "Directing Principles of Private International Law and Conflict of Civilizations" won awards in Lebanon and abroad. In addition to her work as a scholar and as a practitioner, Najm has actively contributed to numerous civil society projects and initiatives. She is a founding member of "Khalass!" (i.e. "Enough!"), a civil society campaign launched in 2007 which works to develop a peaceful and binding solution to the current political deadlock in Lebanon.

Hassan Fadlallah. MP, born in 1967. What an achievement!
https://en.wikipedia.org/wiki/Hassan_Fadlallah

Is it the same complaint from Raad about the Americans ? And also immediately before announcing the killers of harriri?

is there a bigger corruption scam than having a militia armed and terrorizing the Lebanese population on a daily basis and claim they are so pure and religious?
what a farce