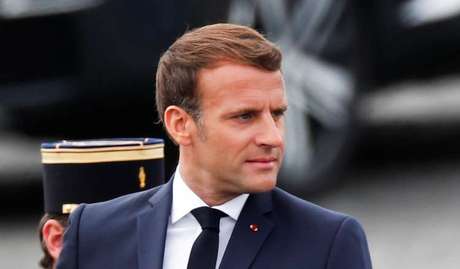 President Emmanuel Macron's security arrangements were brought into question Wednesday after he was confronted by protesters calling for his resignation while strolling in a public garden on France's national holiday.

A group of anti-government "gilets jaunes" (yellow vests) demonstrators spotted Macron and started following him, hurling abuse, as he and his wife Brigitte walked with bodyguards in the Tuileries Gardens near the Louvre Museum in Paris on Tuesday.

In a video posted on the Gilets Jaunes Infos page on Facebook, what appears to be a few dozen protesters boo and shout "Macron demission!" (Macron resign) as they surround the presidential party, many filming on their phones.

"It's incredible, we've stumbled upon the thorn in our side," one protester is heard saying.

Macron engages in a close encounter with agitated men who wave fingers in his face while complaining about police heavyhandedness against protesters and about economic inequality.

Neither Macron nor demonstrators visible in the video are wearing face masks, recommended for preventing coronavirus contagion.

The heated exchange, with security guards looking on, lasted about six minutes.

"It poses a real security problem," the head of the opposition rightwing Republicans party, Christian Jacob, told French television. "How can the president of the republic take such risks?"

Leftist leader Jean-Luc Melenchon said Macron should have been more "cautious" as "a president walking in the Tuileries where there are so many people should expect to come across detractors".

Macron is seen repeatedly urging the group to "be cool," while taking tim to listen to some of their gripes.

He said he understood their "feeling of injustice" but in response to complaints about alleged police abuses, he pointed out that "there are also violent people among yourselves".

"This is a public holiday, I am taking a walk with my wife, and you are heckling me," Macron tells one of them.

The exchange ends with one protester thanking Macron for listening, and saying: "I cannot even curse at him" as the president turns to leave.

"All the better!" replied Macron, who had earlier presided over a Bastille Day ceremony.

According to an official count, about 2,500 demonstrators and 1,800 law enforcement agents have been injured in weekly yellow vest protests that kicked off in November 2018.

The protests largely faded by the summer of 2019, though sporadic protests drawing much smaller crowds have continued almost weekly since then.

The rallies, which started as a protest against a loss of spending power and Macron's perceived contempt for the common man, often sparked tense confrontations with rioters causing damage to property and attacking officers.