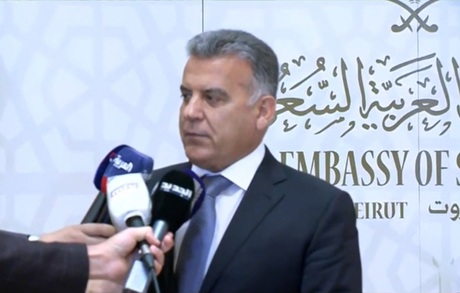 "We consider Saudi Arabia as the gateway for Arab states and we're not seeking to join any alignment," said Ibrahim after the meeting at the envoy's residence in Yarze.

"No one is besieging the government and it is working and will continue to work, and the people will judge the results," Ibrahim went on to say.

"I informed the Saudi ambassador of what we are doing, and nothing prevents to witness the beginning and the end in Saudi Arabia," the general added.

Reassuring that "the atmosphere is very positive," Ibrahim said he is seeking common grounds that would benefit both Lebanon and the countries he is visiting.

"I'm not requesting bank deposits and there is Arab economic integration from which Lebanon and the Arab states should benefit," Ibrahim went on to say.

Ibrahim had visited Kuwait in recent days at the instructions of President Michel Aoun.

Next speaker of parliament

The country of miracles. Now has it's own General Security roaming arab capitals begging for money. Might as well be Foreign Minister. Isn't he supposed to bewitching of national security