Serbia and Kosovo to Resume Rocky Road towards an Accord 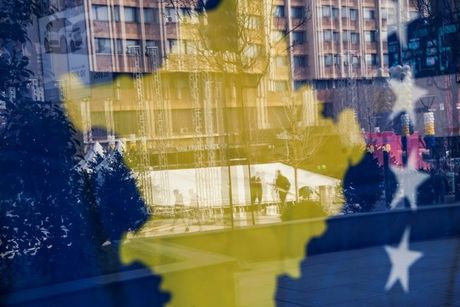 Former war foes Serbia and Kosovo will restart talks in Brussels on Thursday to normalise their strained relationship after a long stalemate, though the road to settling their many disputes is paved with stumbling blocks.

More than two decades after clashing in war, the Balkan neighbours are still haunted by unresolved tensions that threaten instability in their corner of southeastern Europe.

The overarching dispute is territorial: Belgrade refuses to recognise the independence that its former province, home mainly to ethnic Albanians, proclaimed in 2008.

Kosovo's statehood has been backed by around 100 countries, including the United States and most of the European Union.

But Serbia's core allies Russia and China deny it, effectively shutting Kosovo out of the United Nations.

The two sides have been in EU-led talks for a decade to normalise their relationship.

Yet little progress has been made, with a raft of agreements concluded in 2013 yet to be fully implemented.

The latest round of negotiations broke down in 2018 after a series of diplomatic tit-for-tats.

The meeting, scheduled to start at 1400 GMT, will be the first since spring 2019, when a summit in Berlin between Vucic and Kosovo President Hashim Thaci failed to relaunch the negotiations.

While Kosovo is determined to gain full recognition of its sovereignty, Serbia is under pressure to resolve the issue in order to move forward in its bid to join the EU.

EU foreign policy chief Josep Borrell, who will lead the dialogue, has urged the parties to show "political courage" and a "spirit of compromise and pragmatism".

A final accord will need to resolve numerous thorny disputes, including the status of Serb-populated parts of Kosovo, war reparations, and the future of Serbian Orthodox religious sites, among many others.

Both governments also face combustible political situations at home, where any concession to the other side is highly unpopular.

Hoti heads a weak government in Kosovo that "does not enjoy domestic support and is not considered a personality who can lead the process", said Pristina political analyst Imer Mushkolaj.

On the other hand, Vucic is more powerful than ever after his party won a landslide victory in a June parliamentary vote boycotted by Serbia's main opposition.

Yet this total control is in fact a "weak spot" because it comes with  "absolute responsibility," said Serbian political analyst Aleksandar Popov.

"It is going to be tough for Vucic to convince foreign partners that he cannot pass something in parliament," Popov told AFP.

The issue is highly sensitive in Serbia, especially among nationalists who consider Kosovo the cradle of their culture and religious heritage.

In recent anti-government protests initially sparked by Serbia's management of the coronavirus crisis, the slogans "Kosovo is Serbia" and "We will not surrender" were frequently chanted.

Kosovo is clear that the goal of the talks is "mutual recognition".

Vucic, however speaks only vaguely about the need to "accept the reality" of Kosovo, which Belgrade effectively lost control over after the 1998-99 war.

"As far as the situation regarding Kosovo is concerned, it is complicated and difficult for us," Vucic said ahead of the talks.

"I am trying to get what I can for Serbia and to lose only the inevitable minimum."

There is also the question of how the negotiations will go without Kosovo's traditional interlocutor: Thaci.

He is out of the game after being accused by special prosecutors in The Hague of war crimes dating back to the conflict with Serbia.

But the rebel Kosovo Liberation Army (KLA), of which Thaci was a top member, was accused of reprisals on Serbs and fellow Albanians during and after the conflict.