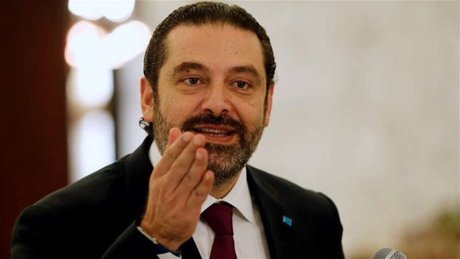 “Maj. Gen. Ibrahim’s drive is necessary and we are in the Arab League. These nations, especially in the Gulf, stood by Lebanon, and today there is unprecedented regional escalation and we must be in communication with them in order to receive aid from them,” Hariri told reporters.

“They have offered a lot and now Lebanon has to offer reforms,” the ex-PM added.

Asked about Diab’s remarks that a party leader has contacted friendly countries to block aid from Lebanon, Hariri said: “I have not contacted anyone, period. The premiership post has been disgraced.”

“I don’t know who called Diab and told him about the issue -- maybe his Syrian regime allies,” the ex-PM added.

Asked about reports that he is being boycotted by the Saudi ambassador, Hariri said: “Let them believe in such things… The relation with Saudi Arabia and all Gulf countries is excellent and maybe that’s what bothers them.”

Separately, Hariri said Lebanon is “paying the price of the regional escalation between America and Iran.”

“No one is blaming Hizbullah, but our slogan is ‘Lebanon First’ and it should not remain a slogan,” Hariri said.

“I have nothing to do with the policy of tightening the noose on Hizbullah, and even Hizbullah has no hand in it; this is an American-Iranian conflict,” the ex-PM explained.

Asked about Bassil’s tweet on the refugee repatriation plan, Hariri said: “They’ve been in the government for six months. Has he returned a single refugee? Let us wait and see.”

Commenting on Bassil’s remarks that he will have to wait for a long time before being able to return to the premier post, Hariri said: “His remarks about the return path are like his remarks about the 24/7 electricity which he had promised us with years ago.”

God must protected the oldest alliance Euro-Asia against Meca+ protestants, the aliance China-Portugal that have more the 500 years!!!

Portugal, don't they call that the arsehole of Europe? Or is it the foot fungus of Spain. Something like that. I can't remember.

I will always have a special place for this guy. Without him I wouldn't be in parliament and my pappy in law in Baabda.

Im Bassil your arguing with Ali the villiage idiot above let him be his trolling is designed to be annoying nothing else.