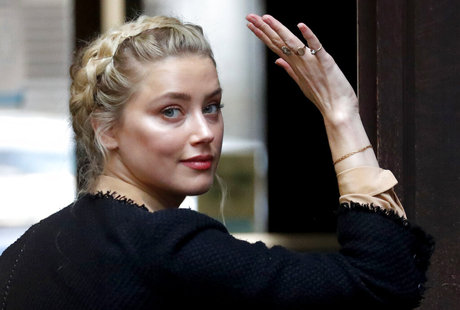 U.S. actress Amber Heard on Wednesday said her ex-husband Johnny Depp threw dozens of bottles at her "like grenades", as she gave evidence for a third day at his London libel action.

Heard, 34, said Depp, 57, had lobbed "all the bottles in reach" towards her during an explosive 2015 row on a trip to Australia.

Depp is suing the publishers of British tabloid The Sun, News Group Newspapers (NGN) and the author of a 2018 article that labelled him a "wife beater" at London's High Court.

The "Pirates of the Caribbean" star has emphatically denied 14 claims of violence that NGN said proves its story, and sought to portray Heard as calculating and dishonest.

The article in The Sun caused him serious reputational damage, he argues.

But Heard has accused Depp of sustained verbal and physical abuse, as well as displaying "extremely controlling and intimidating behavior."

Wednesday's cross-examination focused on Heard's allegations that Depp repeatedly assaulted her in Australia, fueled by drink and drugs, as well as other incidents in the US.

"He started picking them (bottles) up one by one and throwing them like grenades," she said during questioning by one of the actor's lawyers, adding he lobbed around 30 in total.

"He threw all the bottles that were in reach, all except for one which was a celebratory magnum-sized bottle of wine."

The court has previously heard that Depp's finger was severed during the alleged incident. The Hollywood star blamed his ex-wife for the injury, which she denied.

"I don't think he meant to sever the finger but yes he did continue the attack," she told the court.

Heard admitted that she got angry "at times" but "not to the extent where I would throw anything at him offensively".

Depp's lawyer Eleanor Laws also asked her about an alleged December 2015 incident of domestic violence in Los Angeles, which Heard has described as "one of the worst and most violent nights of our relationship".

She defended claims Depp slapped her, dragged her by the hair through their apartment -- pulling clumps of her hair out -- and then repeatedly punched her in the head.

"I had two black eyes, a broken nose, a broken rib... I had bruises all over my body," she said, after Laws argued a nurse who had examined her shortly after the row said she found no bruises.

Laws told Heard that the account was "just nonsense", adding that the only blood the nurse could find was fresh and on her lip.

"You had just bitten your lip because there was fresh blood on it. Had you just done that for (the nurse's) benefit?" Laws asked.

"Of course not," Heard replied.