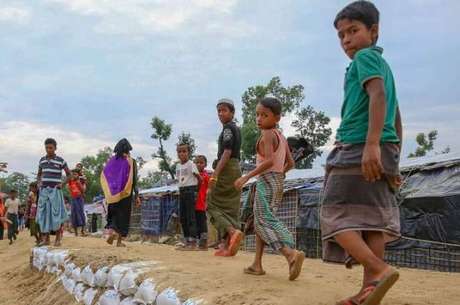 Bangladesh has opened a complex of 20 housing blocks to house some of the growing numbers of people to have lost their homes to rising seas and ever-more-frequent storms.

Climate change has already taken a serious toll on densely populated and impoverished Bangladesh, a country the United Nations has identified as among the most vulnerable to a warming planet.

The new apartment buildings opened on Thursday in the Cox's Bazar district of southeastern Bangladesh and will house around 650 families, with more under construction.

Jobaida Begum, who lost her mother and grandma during the devastating 1991 cyclone that killed 138,000 people, was among the first to get keys for her new apartment.

"Our home in the Kutubdia island was destroyed in the cyclone and we took shelter in a coastal slum outside Cox's Bazar airport. But during high tide, this slum home also goes under water," she said.

The slum, with a population of 40,000, has become one of the biggest settlements of so-called climate refugees in Bangladesh.

Most of its residents are from the Bay of Bengal island of Kutubdia, some 40 percent of which has disappeared under water.

"The sea has swallowed everything my parents had in Kutubdia... We have been living in this damp slum for past 25 years," said Jillul Karim, 40, another of those to get a flat.