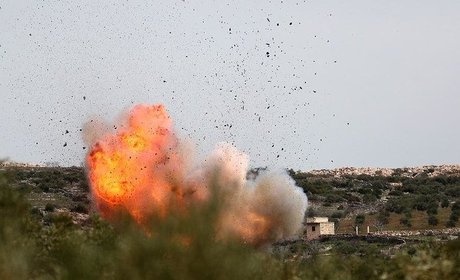 Israeli army helicopters struck military targets in southern Syrian on Friday in retaliation for earlier "munitions" fire towards Israel from inside Syria, escalating tensions between the bitter rivals.

The strikes came hours after America's top general Mark Milley made an unannounced visit to the Jewish state for talks on regional security including Iran, a key ally of the Syrian government.

Israel said early on Friday "munitions" were fired from the Syrian side of the security fence towards Israeli positions in the Golan Heights, which the Jewish state has occupied since the 1967 Six Day war.

A vehicle and a civilian building were damaged, according to an earlier Israeli army statement.

"A number of targets were struck, including SAF observation posts and intelligence collection systems located in SAF bases," the statement said.

Israel did not directly blame Syrian forces for the munitions fire, but said it held the Damascus government responsible for the incident.

Israel has over the past two days announced a reinforced troop presence on its northern border.

Several Israeli media outlets reported that the moves were made in response to an increased threat from the Iran-backed Lebanese Shiite group Hezbollah, which has a significant presence in Syria.

On Monday, five Iran-backed fighters were killed in an Israeli missile strike south of the Syrian capital Damascus, according to the Syrian Observatory for Human Rights.

Hezbollah, an ally of the Syrian regime, said one of its fighters was among the dead.

Israel has launched hundreds of strikes in Syria since the start of the country's civil war in 2011, but rarely comments on such operations.

Israel announced an initial enhanced troop deployment to the north on Thursday and additional measures on Friday, hours before the air strikes.

The army said that in ordering the redeployment it had "elevated its readiness against various potential enemy actions".

It added that it held the Lebanese government responsible for all actions emanating from Lebanon, without referring to Hezbollah.

Gantz said the trip underscored the close security ties between Washington and the Jewish state and warned Israel was "ready for any scenario and any threat".

"I do not suggest our enemies to test us," Gantz said in a statement.

Soon on your favorite TV channel !