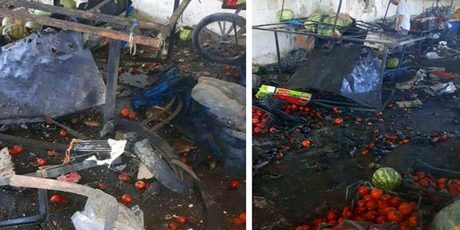 A bomb that exploded Sunday morning in a vegetable market in a north Syrian border town controlled by Turkey-backed opposition fighters killed eight and wounding 19, an opposition war monitor and the state news agency reported.

The blast scorched market stalls and scattered produce in the town of Ras al-Ayn along the border with Turkey.

The state news agency SANA said the blast was caused by a car bomb while the Britain-based Syrian Observatory for Human Rights said the explosion was caused by a motorcycle rigged with explosives.

The Observatory said some of the wounded are in critical condition adding that the dead included a woman and a child.

Turkey's Defense Ministry blamed the attack on Kurdish insurgents, as it has in dozens of other such incidents.

Ankara has blamed explosions that killed and wounded dozens of people in northeast Syria in recent months on Kurdish fighters linked to the Kurdistan Workers' Party, or PKK, which has waged a decades-long insurgency inside Turkey

It views the Kurdish fighters as terrorists, though the same fighters had partnered with the U.S. against the Islamic State group.

Turkey controls most Syrian territory bordering its southern frontier after a series of military operations. Last October, Turkish troops crossed into Syria's northeast, capturing the Ras al-Ayn area in driving Kurdish fighters away from the border after the U.S. withdrew most of its forces from the region.