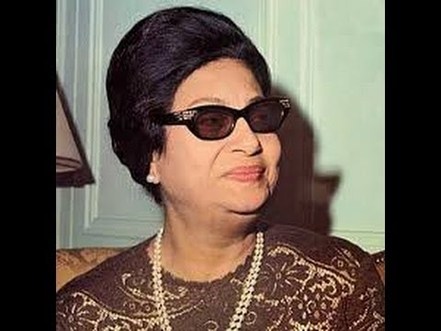 She was one of the Arab world's most revered singers, praised by Bob Dylan and sampled by Beyonce: the late Egyptian legend Umm Kulthum seems worthy of having a street named in her honor.

But when that street is in Israel, a country she condemned while championing the Palestinian cause, a decision to honor the vocalist branded "the Star of the East," has triggered controversy.

Haifa -- Israel's third largest city, where roughly 10 percent of its 300,000 residents are Arab -- decided earlier this month to honor the woman whose deep, resonant voice was also adored by many Jews.

The decision highlights the diversity of the city, "which represents a model of co-existence between Arabs and Jews," Haifa town council head Einat Kalisch-Rotem said.

Umm Kulthum, who died aged 76 in 1975, performed in Haifa in the 1930s when the city was in British-mandated Palestine before Israel's creation in 1948.

After the Umm Kulthum honor was announced, Haifa newspaper Kol Po published a front page black-and-white picture of the singer with some of her lyrics scrawled across the image.

"Now I have a gun, take me with you to Palestine," were the printed lines from one of her songs dedicated to the Palestinians.

During the 1967 Six Day War, the artist sometimes dubbed Egypt's "Fourth Pyramid", also performed a song that willed her nation to victory against Israel.

Writing in Kol Po, a lawmaker from the right-wing Likud party, Ariel Kallner, said he was "saddened" by Haifa's decision to honor a woman "who called for the destruction of the Jewish state".

He vowed to find ways to block the street-naming.

And Prime Minister Benjamin's Netanyahu son Yair, a vocal and often bombastic social media commentator, tweeted that the honor was "shameful and crazy".

Despite Netanyahu's outrage, his father's government supported a festival in 2013 that included a night devoted to Umm Kulthum's work.

And Haifa is not the first Israeli city to honor "the Lady of Cairo".

In 2011, the mainly Arab Beit Hanina neighborhood in east Jerusalem named a street after her and a similar move is planned in the central city of Ramla.

But as the trend has spread, Jewish outrage appears to have grown.

Writing in the Israel Hayom newspaper, commentator Eldad Beck sounded an alarm about the string of Umm Kulthum honors.

"It started with Jerusalem, then Ramla and has ended up in Haifa," Beck wrote, blasting the push "to commemorate one of the biggest and most influential enemies of Israel, who wanted to annihilate the state".

Reducing the controversy surrounding Umm Kulthum to tensions between Arabs and Jews underestimates her wide array of devotees, said Jonathan Mandel, an Arabic language and culture researcher at Ben-Gurion University of the Negev.

He stressed that Mizrahi Jews, meaning those from North Africa and the Middle East, are equally attached to her music.

Israeli musician Ariel Cohen said that some Jews with Arab roots "grew up with Umm Kulthum," and noted that one of her most famous songs, "Enta Omri" -- the tune sampled by Beyonce -- was translated into Hebrew.

"Umm Kulthum is not an enemy," Cohen said.

Cohen told AFP that the former chief Sephardic rabbi, Iraqi-born Ovadia Yosef, used to play Umm Kulthum's music during parties and would sing along to her Arabic lyrics.

"Ariel Cohen said that some Jews with Arab roots "grew up with Umm Kulthum,"

Arab jews, Russian jews, Ethiopian jews etc all look different from each other because they are different people. The only thing they have in common when it comes to Palestine is that they don't originate there and that they are living on stolen land.