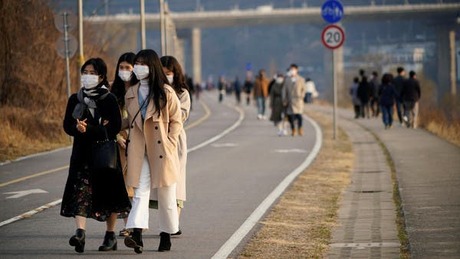 The health minister on Wednesday said France was not in the throes of a second wave of coronavirus infection despite a recent rise in cases, but urged the public to behave responsibly to prevent a new surge.

Olivier Veran acknowledged "warnings signs", but added these were partly due to ramped-up testing.

British Prime Minister Boris Johnson had warned Tuesday of a "second wave" in Europe after a controversial decision to quarantine all travellers arriving from Spain, a move London has not ruled out applying to other countries.

"We are not in a second wave of the coronavirus, we are in the wake of an epidemic -- more or less at a lower level -- depending on the regions and cities concerned," Veran told LCI television.

"Clusters are emerging, we have warning signs from certain hospitals that have seen a trend of increasing admission," he said, adding: "We are testing a lot more."

With the holiday season in full swing in France, night-time curfews were ordered this week for beaches in the Brittany resort of Quiberon on the Atlantic coast after a fast-spreading COVID-19 cluster emerged.

Veran noted people felt the need to relax after the lockdown imposed to combat the virus but warned this was not the moment to let their guard down.

"It is through our collective behaviour and the determined action of the authorities that we will avoid this second wave," he said, reaffirming the urgent need for a vaccine.

After images posted on social media of people enjoying densely-packed outdoor parties across France unsettled authorities, Veran said: "There are people who don't play by the rules. It's when you feel invincible that you take the most risks."

Britain had initially imposed a blanket quarantine on all travellers returning from abroad, but France -- a hugely popular holiday destination for Britons -- is now on a list of countries enjoying an exemption.

France registered 725 new infections and 14 deaths in 24 hours Tuesday, and an accumulated death toll of 30,223, according to official figures.