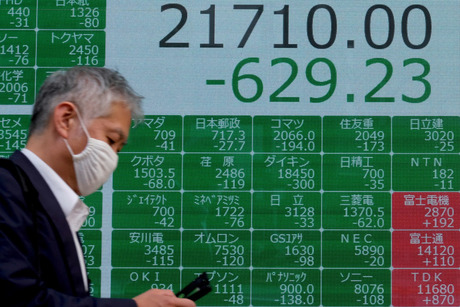 Asian markets struggled and the dollar extended losses Friday as data showing the US suffered its worst quarter on record highlighted the impact of the virus on the global economy.

The figures from Washington added to fears about the long-running economic impact of COVID-19 and overshadowed a better-than-forecast read on Chinese factory activity that suggested the country is slowly emerging from the crisis.

The Commerce Department said the US economy contracted 32.9 percent between April and June as businesses were shut down to prevent the spread of the killer disease -- the worst quarter since records began in the aftermath of World War II.

While the GDP figures were expected to be bad, a more immediate report showed a second consecutive weekly increase in initial claims for unemployment benefits, with another 1.43 million filed last week.

Continuing claims, which is the number of people receiving benefits for more than a week, jumped above 17 million, pointing to ongoing weakness in the economy with several states reimposing containment measures as new infections spike across the country.

"What is probably more worrying for investors appears to be the realisation that the negative headlines with respect to a possible second wave will only make it that much more difficult to achieve any sort of prospect of a V-shaped recovery, particularly since the US labour market rebound appears to have come to a halt," said Michael Hewson at CMC Markets.

France on Friday said its economy shrank a record 13.8 percent, while Spain's dropped 18.5 percent and Italy was hit 12.4 percent in the same period.

In Asia, Tokyo and Sydney were worst-hit with traders worried about a fresh spike in infections in Japan and Australia.

Tokyo lost 2.8 percent and Sydney shed 2.1 percent, while Seoul, Mumbai, Bangkok and Taipei were also in the red.

Hong Kong retreated but Shanghai rose 0.7 percent after China said its closely watched purchasing managers' index on manufacturing improved for a second straight month, with officials pointing to an easing of lockdowns and the resumption of economic activity in major economies.

London, Paris and Frankfurt were higher in early trade.

The already-struggling dollar took another step down across the board following the data.

The euro, helped by this month's massive EU stimulus agreement, built on its recent advance to sit at highs not seen since May 2018, while the yen was sitting at levels not seen since mid-March.

The Federal Reserve's massive easing programme, which has driven interest rates to zero, has played a key role in the dollar's weakness, with high-yielding currencies such as the Australian dollar, South Korean won and Mexican peso also benefitting.

And expectations are for the greenback to continue to flail with lawmakers in Washington unable to find common ground on a new support package and the virus spreading fast.

"There is little reason for the dollar to recover in an environment where more and more investors in accelerating fashion throw aside the previously established assumption that the US will lead the recovery to global economic Nirvana," said Stephen Innes at AxiCorp.

Traders were also rattled by Trump's suggestion the election should be delayed owing to the risk of fraud by mail-in votes.

"2020 will be the most INACCURATE & FRAUDULENT Election in history. It will be a great embarrassment to the USA. Delay the Election until people can properly, securely and safely vote???” he said.

Later at a news conference he again sought to cast doubt on the November poll.

While the president would be unlikely to get the support of both houses of Congress -- with even some Republicans baulking at the idea -- the outburst pricked investors' ears.

"The mere suggestion by Trump of a delay nevertheless does play to concerns that the election result will be challenged in November (should Trump lose) and that, because of the likely larger-than-usual share of votes via mail-in ballots due to the pandemic, we might not know the result on election night itself," said National Australia Bank's Ray Attrill.

"Recall the 2000 election where several recounts in Florida... meant the result wasn't known for several weeks."