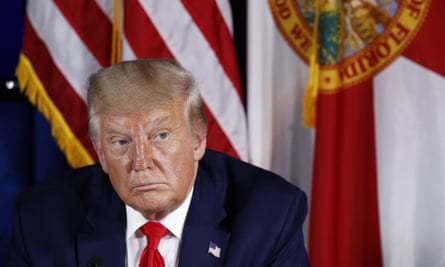 Media will be barred from the Republican National Convention in North Carolina later this month, U.S. news outlets reported, when President Donald Trump will formally receive his party's nomination.

Soaring coronavirus cases have already forced Trump to cancel the part of the convention planned for Florida's Jacksonville in July.

"We are planning for all of the Charlotte activities to be closed press: Friday, August 21-Monday, 24th given the health restrictions and limitations in place in the state," the convention spokesperson had told the Arkansas Democrat Gazette.

"We are working within the parameters set before us by state and local guidelines regarding the number of people who can attend events."

The vote to formally nominate Trump will, however, be livestreamed, according to CNN, which cited a Republican official.

"This is an ill-advised decision that the @GOP @GOPconvention should reconsider," Zeke Miller, president of the White House Correspondents' Association, said Saturday.

"The nomination of a major party presidential candidate is very much the business of the American people."

Miller later tweeted: "An RNC official now says that the decision is not final and that they are still working through press coverage options."

Trump has been forced to scrap his signature rallies because of the coronavirus epidemic, which is killing more than 1,000 Americans a day.