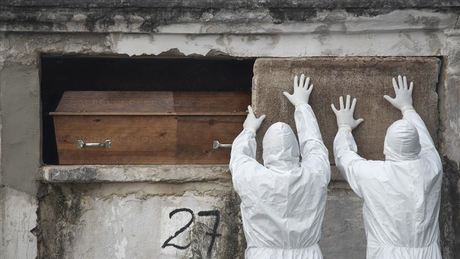 More than 200,000 people have died from coronavirus in Latin America and the Caribbean, with Brazil and Mexico accounting for nearly three-quarters of those deaths, according to an AFP tally compiled from official sources at 0830 GMT on Sunday.

The number of fatalities stood at 200,212 in Latin America and the Caribbean, out of a total 4,919,054 reported cases. The death total doubled in just over a single month.

Latin America is the second hardest hit region in the world after Europe, which has recorded 210,425 deaths and 3,189,322 infections.

The United States and Canada are third.

After Brazil and Mexico, the worst-affected countries in Latin America are Peru, Colombia and Chile.

According to virus infection numbers as a proportion of the population, Peru tops the region's list, followed by Chile, Brazil, Mexico and Panama.

The tallies, using data collected by AFP from national authorities and information from the World Health Organization (WHO), probably reflect only a fraction of the actual number of infections.

Many countries are testing only symptomatic or the most serious cases.