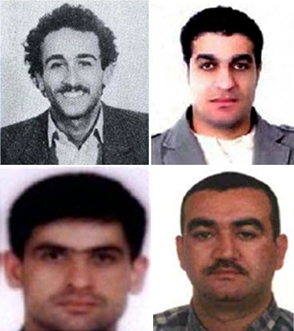 A UN-backed court is to deliver its judgement Friday on four suspected Hizbullah members tried in absentia for former Lebanese premier Rafik Hariri's murder in a 2005 Beirut car bombing.

The Lebanese Shiite movement does not recognise the Netherlands-based Special Tribunal for Lebanon, denies all the accusations and has refused to hand over the accused.

A massive bomb tore through Hariri's armoured convoy as he drove home for lunch on Valentine's Day 2005, killing him and 21 other people including seven of his bodyguards, as well as wounding 226 others.

Here are those indicted:

The alleged mastermind, Hizbullah commander Mustafa Badreddine is believed to have died in Syria in May 2016 while providing military support to the Damascus regime.

The Special Tribunal for Lebanon (STL) in July that year overturned its decision to try him in absentia, finding sufficient evidence to establish his death.

He was jailed in Kuwait for attacks on the French and US embassies in 1983.

His release was among the demands of Shiite militants who hijacked two airliners, before he was freed in the chaos caused by Iraq's 1990 invasion of Kuwait.

Salim Ayyash, 56, has been accused of leading the team that carried out the bombing.

His whereabouts, like the three others awaiting the verdict, remain unknown.

In a separate case, the tribunal in 2019 also charged him with terrorism and murder over three other deadly attacks on Lebanese politicians in 2004 and 2005.

Hussein Oneissi, 46, and Assad Sabra, 43, allegedly sent a fake video to the Al-Jazeera news channel claiming responsibility on behalf of a non-existent group.

The court in 2018 threw out a bid to acquit Oneissi, saying that while much of the evidence was circumstantial, it was still in theory sufficient to produce a conviction.

Much of the prosecution case has relied on mobile phone records that allegedly show the suspects conducting surveillance of Hariri until minutes before the explosion.

The defence has argued the evidence was "theoretical" and that the defendants had "no motive" to carry out the crime.

Hassan Merhi, 54, is accused of general involvement in the plot.

He is charged with the same crimes as Oneissi and Sabra.

Aren't these the ones that nasrallah identified as "saints'?