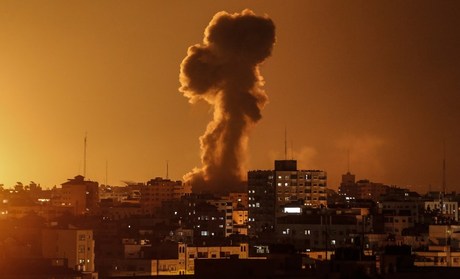 Israeli fighter jets carried out strikes on Hamas facilities in the Gaza Strip after a "rocket" was fired from the Hamas-controlled enclave towards the Jewish state, its military said Monday.

Israel said Sunday night a "projectile" fired from Gaza had been intercepted by its Iron Dome anti-rocket system.

It was the first to be fired from the Palestinian coastal enclave since the first week of July, and set off sirens, the Israeli army said.

In response, "our fighter jets and & aircraft just struck subterranean Hamas terror facilities in Gaza," the Israel Defence Forces said in a statement.

A spokesperson for the regional council of Shaar Hanegev, the area where the sirens sounded, said the projectile launched from Gaza had not caused any damage or casualties.

Israel and Islamist movement Hamas have fought three wars since 2008.

Despite a truce in recent months, they have periodically exchanged fire, with militants in the strip lobbing rockets into Israel and the Jewish state responding with strikes against targets inside Gaza.