Foreign Minister Resigns in Protest at Govt. Mishandling of Crisis 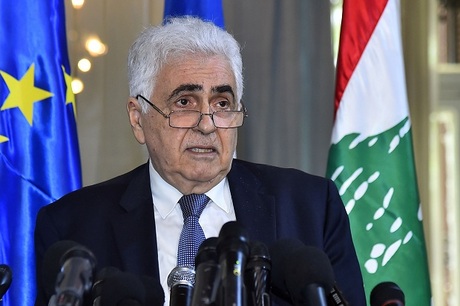 Foreign Minister Nasif Hitti announced on Monday his resignation from office in protest at the performance of the government, warning a lack of vision and a will to make changes risked turning the country into a “failed state.”

“After giving it a lot of honest thought, I have come to the conclusion that I cannot perform my duties in these historical circumstances,” Hitti said. He said he had decided to resign “due to the absence of a vision for Lebanon ... and the absence of an effective will to achieve comprehensive structural reform.”

In a stark warning, he said Lebanon was turning into a “failed state” and urged politicians to rally around the country's national interest.

“Otherwise the ship will sink with everyone on board,” Hitti said.

A career diplomat, Hitti became foreign minister in January as part of Prime Minister Hassan Diab’s government. He was was reportedly unhappy with the government's performance and lack of movement on promised reforms.

Local media reports said he also was angered by Diab’s criticism of French Foreign Minister Jean-Yves Le Drian following his visit to Beirut last month. Diab had said Le Drian “did not bring anything new” and was not properly informed about the reforms implemented by the Lebanese government.

It was not immediately clear whether his resignation would be accepted and whether one of the other ministers would assume his responsibilities in caretaker capacity until a new minister is appointed.

And this has nothing to do with the STL??? lol

Saved his honor after losing it by joining this failed hizbi government.

It is widely known that behind the scenes Jebran Bassil is the "de facto" Foreign Minister. This is unacceptable and Mr Hitti is a courageous credible politician. Other ministets should do the same by quitting this ineffective government.

He finally confirmed what I have been saying all along, the government just does not want to do any reforms. They just want the money from foreign donors so they can line up their pockets.

To the people of this failed state we call Lebanon, please understand that government is not the solution, government is the problem. Therefore this whole system must collapse, to start fresh and new.

I am encouraged that a Lebanese politician is developing a conscience! Is it possible that they are waking up to a sense of fairness and honour? Sadly, it's too late they are still playing games while the country burns and the people suffer. A political elite that is not fit to be in charge of a rubbish dump let alone rule a country, they should be ashamed of themselves and what they have done to a beautiful country and it's spirited and talented people.

Farouk the word you're looking for is TFEH!