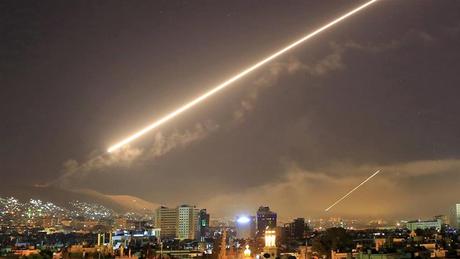 The Syrian Observatory for Human Rights meanwhile reported there were Israeli air raids on the southern province of Quneitra and on Boukamal city, near the Iraqi border in the northeast.

The Israeli army meanwhile said that it had used fighter jets, attack helicopters and other warplanes late Monday to hit Syrian military targets in the south of the country.

It is unusual for Israel to publicly claim such attacks.

Israel said it was in response to an attempt by four men to lay explosives near the Israeli-occupied sector of the Golan Heights.

Since 2011, Israel has launched hundreds of strikes in Syria, targeting government troops and allied Iranian and Hizbullah forces and vowing to end Iran's military presence in Syria.

An alien woman named Maya crash-lands on Earth. Her homeworld was destroyed by the Blasters, a cruel alien race who steals the natural resources from other planets. She falls in love with a scientist and gives birth to a human boy named Kantaro. When the Blasters invade the Earth, Kantaro must defeat them by fighting with Astroganger, a robot made from living metal.

For those who never saw Jongar this is the plot of this famous Japanese manga; exactly what is happening in Syria's space (BS)!

Is this the cartoon/Joke section of Naharnet?

lol my reply was for you dear exactly what I think!

Thanks for the link. Any idea about the nationalities of the "pro-iranian gunmen"?

Straight out of a star wars movie

It seems like the Iraelis directed their attacks on the east parts of Syria, perhaps not to escalate the conflict with Hezbollah too much at this point in time. So probably iraqi and afghan gunmen hit, but if they were lucky there might have been some iranian or Hezbollah-"advisors" there.