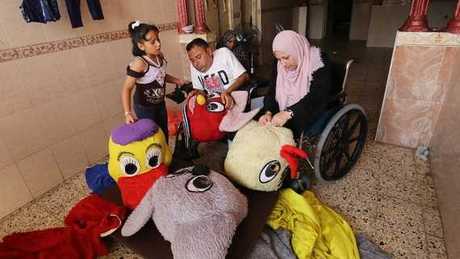 With skilled fingers, disabled Gazan couple Nihad and Zeinab Jarboa have supported themselves by sewing finely detailed dolls and costumes, but coronavirus has hurt their already meager income.

Making a living is a challenge for all residents of the Israeli-blockaded Palestinian territory, which is ruled by the Islamist movement Hamas and where the poverty rate exceeds 50 percent.

But the Jarboas face added adversity.

Nihad, 37, has been physically disabled since childhood while Zeinab, 35, had both feet amputated after contracting a rare disease while giving birth to her second child.

Both use wheelchairs, further limiting their work options in the Gaza Strip, where the unemployment rate is above 50 percent, according to official statistics.

The Jarboas have perfected a craft of making dolls and costumes inspired by cartoon characters.

They generate a modest income by selling the dolls and by sending costumed performers to nurseries and schools.

They also charged about 20 shekels (around $6) each to send actors to perform at events.

"But everything stopped with the pandemic," he said.

Access to Gaza was already tightly controlled by Israel and Egypt before the virus, which has left 78 confirmed infections and one dead in Gaza.

Hamas has imposed lockdown restrictions since March, including bans on gatherings and the closure of schools and mosques.

"Unemployment and poverty rates are expected to increase," Tabaa told AFP, adding that 80 percent of the population was already dependent on food aid.

Even though some restrictions have been lifted, the Jarboas said they have only received two requests for shows while doll sales are down 75 percent.

"We won't give up, even if it's hard," said Zeinab as she prepared tea on a stove in their one-bedroom apartment in Rafah refugee camp of southern Gaza.

"Things are harder with coronavirus (but) I am strong enough," she said, her hair covered with a pink scarf.

"I want to raise my children so they have a decent life."

Like nearly 50 percent of Gaza residents, the Jarboas receive food aid from the United Nations agency for Palestinian refugees (UNRWA).

Over 700,000 Palestinians fled or were expelled from their land at Israel's creation in 1948. Survivors and descendants are considered refugees by the U.N.

But UNRWA's support is "not enough to buy food," said Zeinab as she sewed a brightly colored costume inspired by Donald Duck.