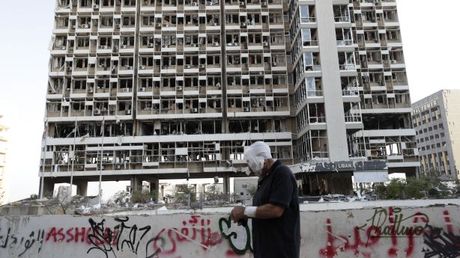 Russia's emergency officials say the country will send five planeloads of aid to Beirut after an explosion in the Lebanese capital's port killed at least 100 people and injured thousands on Tuesday.

Russia's Ministry for Emergency Situations will send rescuers, medical workers, a makeshift hospital and a lab for coronavirus testing to Lebanon.

France, Jordan and other countries also say aid is on the way.

International aid in the form of emergency workers and medical personnel is heading to Lebanon a day after a massive explosion devastated Beirut's port, killing at least 100 people and wounding thousands.

Jordan says a military field hospital including all necessary personnel will be dispatched, according to the Royal Court. Egypt has opened a field hospital in Beirut to receive the wounded.

Czech Interior Minister Jan Hamacek says Lebanon has accepted an offer to send a team of 37 rescuers with sniffer dogs to Beirut. Denmark says it is ready to provide humanitarian assistance to Lebanon, and Greece says it is ready to help Lebanese authorities "with all means at its disposal."

Prime Minister Hassan Diab, in a short televised speech, has appealed to all countries and friends of Lebanon to extend help to the small nation, saying: "We are witnessing a real catastrophe." He reiterated his pledge that those responsible for the massive explosion at Beirut's port will pay the price, without commenting on the cause.

Diab's speech came the morning after the blast killed at least 100 people and wounded thousands.

Smoke was still rising from the port Wednesday morning. Major downtown streets were littered with debris and damaged vehicles, and building facades were blown out.

Lebanese Red Cross official George Kettaneh said at least 100 people were killed and more than 4,000 were wounded, and said the toll could rise further.

Israel has offered humanitarian and medical aid to Lebanon following on the terrible explosion in Beirut Port. Although this aid could be on site within a couple of hours, I can only presume that the obstinance of the Lebanese Government controlled by Hizballah will make them refuse this aid.

how much does Israel pay or is it pro-Bono

Phillipo ... Humanitarian Israel can let the hundreds of thousands of Palestinians it expelled to Lebanon back to their homes in what is Israel. Fake gestures of humanitarian concerns are just fake.

And look at their hypocrisy... they go out and justify the creation of a Jewish state and Jewish immigration to Palestine because more than 2000 years there were jewish kingdoms there. But somehow Palestinian children lose that rights! Please understand that the right wing in Israel and the right wing (Islamists and maximalists) in our midst are two sides of the same coin. Yes for peace but with justice.

Why don't you both shut the hell up. Lebanon needs unity and just because Israel said something it doesn't mean that they meant it, everybody knows it is a media stunt.

There's one way to find out -- accept the offer. Who knows it could lead to a reconciliation. Israel has among the best medical capabilities in the ME.

Reconciliation can only happen after Israel allow Palestinian refugees in Lebanon to return home.

Millions of refugees around the world have over the years been assimilated into the countries they are living in, why should those over 72 years old in Lebanon be any different.
According to the official UN protocols, people who were born where they now live are not regarded as refugees. Only UNWRA thinks otherwise.