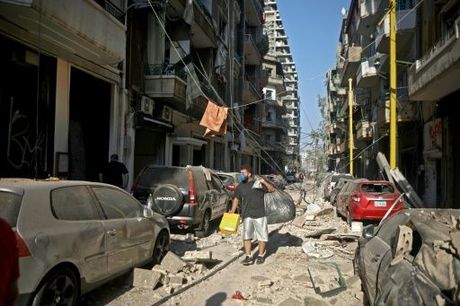 Heritage buildings, trendy bars and hip art galleries, all gutted: the vibrant Mar Mikhail district, once one of Beirut's gems, is now a wasteland of broken glass and destroyed cars.

A short walk from Lebanon's main port, where a huge blast on Tuesday flattened buildings and killed more than 100 people, the bustling nightlife hotspot was among the hardest-hit areas.

Today it is unrecognizable even to those who grew up there.

"Now, I feel like I'm entering an unfamiliar place," she said. "I never thought there would come a day... when I would see Mar Mikhail like this."

Inside a damaged house more than a century old, Michel Asaad gathered shards of glass in a bucket.

In a room that looked like it was hit by a tornado, a toppled statue of the Virgin Mary had been resurrected -- but was missing its head.

Asaad pointed to other architectural gems that gave the street its traditional character, popular with Lebanese and foreigners alike.

The oldest among them have totally collapsed, while those that sustained less damage now have craters in their walls or are missing roofs.

Beirut's governor has said the blast made nearly 300,000 people homeless.

Asaad said he was "only one of the hundreds, if not thousands, of people" affected in the neighborhood.

Mar Mikhail's concrete pavement was carpeted with broken glass that crackled underfoot as residents streamed in to check on their properties on Wednesday morning.

Mangled vehicles with air bags poking out of broken windows lined the sidewalk, their owners waiting for them to be lifted.

Dozens of people dragging heavy suitcases made their way up a steep road, joining the exodus from a district rendered almost uninhabitable.

Rescue workers carried an elderly woman out of her house on a wooden chair from her living room.

Wearing a face mask, Mar Mikhail resident Khalil said he had lived in the neighborhood for 50 years, including throughout Lebanon's 1975-1990 civil war.

"During the war, we would see shells fall here and there," said the 78-year-old.

"But we have never seen something like this. Not even in our worst nightmares could we have imagined it."

People walking through the street did not know where to look: at the utter devastation around them, or overhead, where sharp stalactites of broken glass threatened to break off at any moment.

"It looks like World War II," said one passerby, examining the damage.

Nearby, a woman broke down crying as she described the scene to a friend over the phone.

Historically an Armenian district, Mar Mikhael counted several Armenians among Tuesday's casualties. Nurse Jessica Beckjian died under the rubble of her office at the heavily damaged Saint George Medical Center near the port.

In more recent times it has been gentrified to become the heart of Beirut's cultural life, bustling with young crowds frequenting its galleries, restaurants and bars.

But Wednesday's traffic jams weren't caused by revelers heading to their favourite watering hole. Instead, cars lined the road bumper-to-bumper as people flocked to inspect their homes and shops.

Tuesday's blast came on top of a spiraling economic crisis compounded by a coronavirus lockdown, adding some $3 billion-worth of damage to the heavy burden weighing on the small Mediterranean country.

Sweeping shards of glass from the floor using a broom, volunteer Tala Masri said the damage done by the blast went well beyond its immediate economic impact.

"Mar Mikhail is our second home, especially us the youth," said the 18-year-old student.

"Even with the coronavirus, and everything else that has happened in the country, I always had hope," she added.