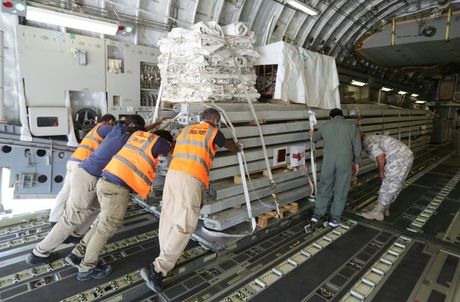 Emergency medical aid and pop-up field hospitals were dispatched to Lebanon Wednesday along with rescue experts and tracking dogs, as the world reached out to the victims of the explosion that devastated Beirut.

The blast centered on the city's port caused massive destruction and killed more than 100 people, heaping misery on a country already in crisis.

Gulf states were among the first to respond, with Qatar announcing it was sending mobile hospitals to ease pressure on Lebanon's medical system, already strained by the coronavirus pandemic.

A Qatari air force plane with a cargo of hundreds of collapsible beds, generators and burn sheets touched down in Beirut in the first of a convoy of flights to the Mediterranean country.

Medical supplies from Kuwait also arrived, as the Lebanese Red Cross said that more than 4,000 people were being treated for injuries after the explosion, which sent glass shards and debris flying.

A Greek C-130 army transport plane bearing a dozen rescuers landed at Beirut's airport, itself damaged in the catastrophic explosion.

Prime Minister Hassan Diab has called on "friendly countries" to support a nation already reeling from its worst economic crisis in decades as well as the impact of the coronavirus.

As emergency crews hauled survivors from the rubble of demolished buildings, France said it was sending search and rescue experts aboard three military planes loaded with a mobile clinic and tonnes of medical and sanitary supplies.

President Emmanuel Macron is to travel to Lebanon on Thursday, to "meet all political actors" following the catastrophe, his office said.

"France is at the side of Lebanon. Always," Macron tweeted in Arabic earlier.

Iran's President Hassan Rouhani said in a message to his Lebanese counterpart that Tehran was "ready to offer medical and medicinal aid and help treat the injured". Jordan's King Abdullah II also promised to dispatch a field hospital.

Cyprus -- which lies just 150 miles (240 kilometres) to the northwest and was shaken by Tuesday's blast -- said it was sending eight police tracking dogs and their handlers aboard two helicopters, to help in the search for victims.

Dutch authorities announced that 67 aid workers were headed for Beirut, including doctors, police officers and firefighters, and the Czech Republic dispatched 36 rescuers including dog handlers trained to seek out those trapped in ruins.

Close allies and traditional adversaries of Lebanon alike sent their condolences, with Iran and Saudi Arabia -- long rivals for influence over the country -- both sending messages of support.

"Our thoughts and prayers are with the great and resilient people of Lebanon," Iranian Foreign Minister Mohammad Javad Zarif tweeted.

Saudi Arabia said it was following the situation with "great concern".

Unusually, neighbouring Israel offered humanitarian aid -- to a country with which it is still technically at war -- via international intermediaries.

US President Donald Trump said "it looks like a terrible attack" and that US generals had told him that the powerful explosions appeared to have been caused by a "bomb of some kind," without offering evidence.

Syrian President Bashar al-Assad wrote to his Lebanese counterpart Michel Aoun that "on behalf of the Syrian Arab people, we extend our sincere condolences to you and the Lebanese people".

Pope Francis offered prayers for the victims and their families so that they might "face this extremely tragic and painful moment and, with the help of the international community, overcome the grave crisis they are experiencing."

And still Lebanon refuses to accept humanitarian and medical aid from Israel, just next door.

Philipo what are you realy trying to show here? we all know your dad or uncle was part of jeish Lahad and that you have sympethies for Israel and fine if you choose that right good for you. What you are and what you beleive in is not what the leadrship in Israel beilevs in, their business is Israel first and not that of lets make a deal like you would like to do. So instead of placing posts on the board to encourage people to love Israel here (which will not happen) try understand the division between the Lebanese first.

Keep dreaming phillipo...whilst hizbi cave men are in control accepting anything from Israel is not going to happen. Your credibility is also somewhat compromised in how you destroyed infrastructure not related to hizbi cave men in your last party here in Lebanon. Also usurping parts of the West Bank, you're really not entitled to, isn't a good look. It's true as the closest neigbour you may have helped save lives but at the moment Israel is persona non grata in Lebanon.

Kizb has brought so much damage and pain to Lebanon to promote two things, hostility in the area and that of influence into yet another state that has a lot of shi3a in it. Look at what that has gianed the people in these nations, Yemen, Iraq, Syria and Lebanon all at the brink of survival. Kizb supporters need to understand why most Lebanese know quite well what their program is and we will not buy into it. The port of beirute is but the lattest victim of Kizb's weapoins storage saga and this will continue at the price of the nation. We will not allow this to continue and will all be united against Kizb in a matter of time.