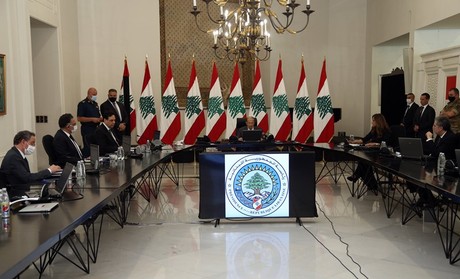 The government on Wednesday said it wanted officials placed under house arrest over a cataclysmic Beirut blast, as it announced a two-week state of emergency in the capital.

"We call on the military leadership to impose house arrest on all those who organized the storage of ammonium nitrate" at Beirut's port, Information Minister Manal Abdul Samad said, referring to the substance that sparked Tuesday's massive explosion.

The blast killed more than 100 people and wounded thousands more, leading Abdul Samad to announce a two-week state of emergency with immediate effect.

It happened under Diab and Aoun’s watch, they can start with themselves.

this is a joke to avoid accountability

Abbas ibn Abu 3adass (ra7amahu allahu) did it I have google earth pictures as proof. What a joke this so called government has been the worst ever in Lebanons history.

Hmmm, I thought there were 2 explosions. The first and smaller one which was caused by an attack on an ammunition depot and created a massive fire which caused the second explosion when the fire reached the "substance" in another depot.

...but what do I know? I am just but a peasant living abroad who doesn't know how to count to 10.

RIP to all the innocents who lost their lives and deepest and sincerest condolences to their loved ones!

To the LIVING and the INJURED, you are LEBANESE, you have endured and suffered forever and a day, yet you continue to rise. I know you will rise again! May GOD smile upon you.

In essence to cover up for Kizb and the loss of the arms depot on the Port the gvernment is being left with the bag. They have to come up with the excuses, and the culprits who will be thrown to the lions. Meanwhile Kizb simple looks at other ways and means to repair their infrastructure and weapons manufacturing at the cost of the Lebanese civilian. Tfeeh 3ala heik hizb wahayk sha3b Irani acting as if they are protecting Lebanons interest while doing Irans dirty deeds at the cost of Lebanon.