What Political Fallout from the Lebanon Blast? 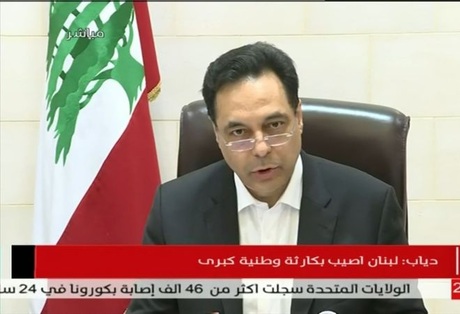 The colossal explosion that devastated Beirut's port and gutted entire neighbourhoods of the Lebanese capital deals a fresh blow to an already fragile and deeply unpopular government.

Lebanon's ruling elite was already under enormous pressure from a protest movement that rejects it as inept, corrupt and beholden to the country's myriad sectarian groups rather than the national interest.

With public anger now boiling over the epic destruction caused by a disaster blamed on official negligence, in a country choking from its worst ever economic crisis, what will be the political impact?

Prime Minister Hassan Diab's government, billed as technocratic line-up when it was launched in January, is seen as subservient to the party of President Michel Aoun and his Hizbullah allies.

In weeks of talks, the cabinet has failed to reached a deal with the International Monetary Fund on a rescue package for Lebanon, which defaulted on its debt earlier this year.

Battling runaway inflation, mass unemployment and rising poverty, the government is already fraying at the edges.

This week Nassif Hitti resigned as foreign minister to protest a lack of willingness to tackle much-needed reforms, warning that Lebanon risked becoming a "failed state".

Maha Yahya, director of the Carnegie Middle East Center, argued that "in any other country, the government would resign" after such deadly blasts.

"Irrespective of how this explosion came to happen there is absolute criminal neglect."

Security officials told AFP that huge quantities of highly explosive ammonium nitrate had been stored for years in a rundown warehouse and that the hazard was known to the authorities.

"The catastrophe, while exceptionally severe, is the result of business as usual in Lebanon," Faysal Itani, a deputy director at the Center for Global Policy, wrote in The New York Times.

"There is a pervasive culture of negligence, petty corruption and blame-shifting endemic to the Lebanese bureaucracy, all overseen by a political class defined by its incompetence and contempt for the public good."

Nonetheless, in the context of extreme geopolitical polarisation in the region, especially between arch foes the United States and Iran, the government's sponsors might seek to preserve it at all costs.

"Despite popular anger... a resignation still seems unlikely just now because there is no clear alternative," said Karim Bitar, a professor of international relations in Paris and Beirut.

An unprecedented nationwide and cross-sectarian protest movement that erupted on October 17 had looked at one stage like it could topple the hereditary ruling elite.

The euphoria faded however as change failed to materialise and the combination of economic hardship and the coronavirus pandemic left the popular revolution in tatters.

Bitar predicted that Tuesday's tragedy would give the protest camp "a second wind".

"The Lebanese will be more determined than ever to make a political class which is corrupt to the bone accountable," he said.

But Yahya argued that many among the protest camp could also see the port blast as the last straw that convinces them to leave the country for good, joining Lebanon's massive diaspora.

The government announced a two-week state of emergency with immediate effect on Wednesday, which could also foil any plans for mass protests in the short term.

The Tehran-backed movement, the dominant political player in Lebanon, appealed for unity and its leader Hassan Nasrallah has postponed a televised address initially slated for Wednesday evening.

"They will also be held accountable because they are part and parcel of the governing system," said Yahya.

Hizbullah's influence on the running of the port is known to the public and will reflect badly on the organisation, she said.

Strangled by US sanctions, the Shiite movement is also bracing for the upcoming verdict in the trial over the 2005 assassination of former prime minister Rafic Hariri.

The main suspects are alleged Hizbullah members and a guilty verdict could further pile pressure at home and abroad on the Iranian proxy, which the US and many other Western countries consider a "terrorist" group.

The special tribunal in The Hague handling the case announced on Wednesday it was postponing the verdict, initially due on Friday, to August 18 as a consequence of the deadly port blast.

Whichever way the verdict goes, heightened tensions between Hizbullah and Hariri supporters are a risk.

"in any other country, the government would resign after such deadly blasts".

Not necessarily, sometimes only the Minister or Ministers directly responsible. In this case presumably the Minister of Transport (Port Authority) and whoever is responsible for the judiciary not being requested for permission to get rid of this material.
However in the case of Lebanon any present ministers can always claim that this happened 6 years ago and they have been in office only a few months and so get away with it.

"The Lebanese will be more determined than ever to make a political class which is corrupt to the bone accountable,"

Before recovering, Lebanon must decide who is running the country, the PM and Parliament or Hezbollah. There can only be one gun and one federal budget. The alternative is to break up into separate states.

What are you talking about arturo? Hezbollah brought this PM to power and has many members of parliament. The Lebanese people need to topple them, and not elect them back to parliament. The Lebanese people have had several occasions to vote them out of power in the past few parliamentary elections, but for several reasons, have not done so. There is a lot of work to do to support the Lebanese and show them that they do NOT have to vote for this criminal ruling class. This catastrophe has helped in pushing the Lebanese population away from the political class, but I don't think it's enough.

Unfortunately Lebanon has already decided that Hizballah is in control, (If you don't believe me - ask the President, the Head of the Armed Forces, the Managers of Beirut Port and Airport amongst others) and there is nothing that can be done against this.

Phillipo once and for all STOP with this Lebanese choice rubbish. You're not at the supermarket where you choose the full fat or low fat milk. Lebanese are themselves hostages to hizbi cave men. They are armed to the teeth how the hell do you israelis think unarmed Lebanese are going to take them on? The silent majority hates them as much as you do but are helpless without external help.