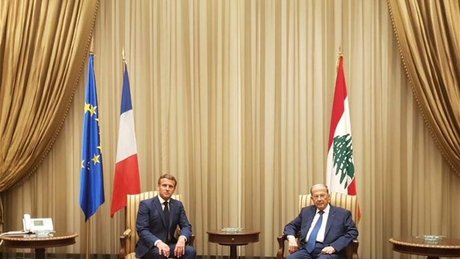 Speaking to reporters after the talks, Macron urged “transparent and fast” investigation into the catastrophic explosion that rocked Beirut’s port on Tuesday, killing at least 137 people, injuring around 5,000 and leaving dozens missing while causing massive material damage across the capital.

“I spoke to the three presidents very frankly and initiatives must be taken to reform, stop corruption and fix electricity,” the French leader added.

He also said that the economic and financial crisis requires “strong political initiatives.”

A joint statement issued after the meeting said Aoun stressed “firm determination to identify the causes of this tragedy-crime and those behind it and to hand them the appropriate penalties,” underlining that “this is the priority today.”

Transparent is not something that Diab and Aoun wanted to hear---they already have some low level workers who were unfortunately killed as their scapegoats.

The gardner, cleaner and a dead cadavre pulled from the site that no one can recognise...the usual suspects.

No transparent and credible inquiry if purely local. It must be internationalised and the UN Security Council should create such a probe.

The will politacise it if they disagree with the teams goals.

ouf did you think that by yourself or you are just repeating what you read ?
Macron isn't loved in france because he simply imposed reforms on what was a system dating back from the 30's - Leon Blum's pain paix liberté. People put in closet jobs so they wont get fired at the expense of the rising youth ?
France was a country with 0 Innovation and now it has become a startup hub thanks to him ? He is was a brilliant man in banking yes, crafting deals with the vultures of this world (IE Nestle's CEO) and it makes him fully capable of handling the hyenas we have at the helm in lebanon.
Securing his fortune ? WHAT POLITICAL PERSONALITY CAME TO LEBANON, if there were fortunes, everybody would have rushed right?
Anyway habibi, read a book will ya ?