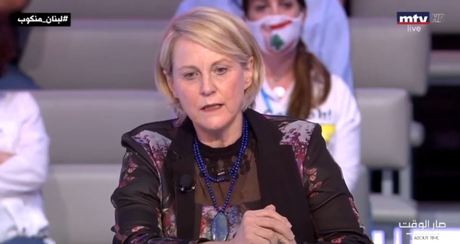 Lebanon's ambassador to Jordan Thursday announced her resignation, following a cataclysmic blast that ravaged central Beirut, saying 'total negligence' by the country's authorities signalled the need for a leadership change.

It is the second resignation by a Lebanese official since Tuesday's blast killed nearly 150 people, wounded at least 5,000 and destroyed entire districts of the capital.

Lawmaker Marwan Hamadeh had resigned on Wednesday over the blast, which authorities said was triggered by a fire igniting 2,750 tonnes of ammonium nitrate negligently stored in a warehouse at Beirut's port.

In a televised statement aired by Lebanese broadcaster MTV, ambassador to Jordan Tracy Chamoun said she could "no longer tolerate" the government's ineptitude.

"I am announcing my resignation as an ambassador... in protest against state negligence, theft and lying," said Chamoun, who was appointed to her post in 2017 with the endorsement of President Michel Aoun.

"This disaster rang a bell: we should not show any of them mercy and they all must go," she added.

"This is total negligence."

The country's ruling class, long accused of ineptitude and corruption, have been the target of a protest movement that began in October demanding systemic change.

The small Mediterranean nation has since been gripped by its worst economic crisis since the 1975-1990 war, further fuelling anti-government sentiments.

After Tuesday, many Lebanese were boiling with anger over a blast they see as the most shocking expression yet of their leadership's incompetence.

Many have raised questions as to how a huge cargo of highly explosive ammonium nitrate could have been left unsecured in the capital for years.

French President Emmanuel Macron, who visited Lebanon on Thursday, called for an international enquiry, echoing demands widely supported in Lebanon and abroad for an independent probe.

They include former and current port and customs officials as well as maintenance workers and their managers.

good bye to her and her late father another Israeli stooge.

You iranian project puppet. Such advanced countries you've devoted your feeble life to.

She never recovered from what happened to her and her mom on 7 July 1980 and she let this hate color everything she did since.