First Arrests Made after Beirut Blast 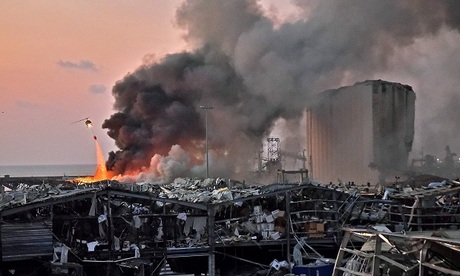 Investigation into the huge blast in Beirut made its first arrests with authorities saying 16 people had been detained, according to Friday reports.

With destruction from the blast extending over half of the capital and the damage expected to cost more than $3 billion, world leaders have backed calls from ordinary Lebanese for those responsible to be held accountable.

In his snap visit on Thursday, Macron stressed the need for an international investigation after meeting Lebanese politicians, including representatives of the powerful Shiite Hezbollah movement, whose leader Hasan Nasrallah was scheduled to speak later on Friday.

Lebanese authorities had announced their own inquiry into Tuesday's explosion and a military prosecutor on Thursday said 16 people had been detained.

The central bank also ordered an asset freeze for seven port and customs officials, an official and a banking source told AFP.

The measures did not dampen the anger in Beirut's streets, where dozens of demonstrators scuffled with security forces late Thursday drawing a volley of tear gas.

Lebanon's leadership was already deeply unpopular, with a wave of mass protests that erupted in October last year only abating in the face of the coronavirus pandemic.

With Hezbollah in charge, the destruction of Beirut was matter of time.
What did Lebanon expect? What did the citizens of a country sadly known for years of civil war and internal strife think would happen, after they let their country be taken hostage by terrorists?

This is the headline of today’s JPost.....

Sure, let the small guys pay, and the big charlatans governing this country go free. This country is Fuc...ed