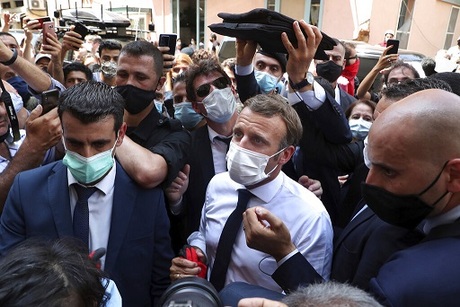 French President Emmanuel Macron has set the bar high in its strategy on Lebanon after the port blast that devastated Beirut, upping the pressure on the country's political elite by not just promising aid but also demanding radical reform.

Macron's visit to the capital on Thursday, just two days after the blast that left over 150 people dead and left hundreds of thousands without homes, was one of the most visually symbolic moments of his three years in power.

He rubbed shoulders with ordinary people on the streets of Beirut in a way no Lebanese leader has done, expressing empathy with their anger over corruption and inefficiency which has been intensified to new levels by the blast.

Macron, who made clear his visit was to express solidarity with the people and not politicians, emphasized that Lebanon needed more than aid.

He said the country required "deep" change and a "new political order" to resolve years of political and economic crisis.

Lebanese in the streets of Beirut, many of whom are tired of political powerbrokers whose influence dates back to the 1975-1990 civil war, chanted slogans against their leaders and "Vive La France!" as Macron inspected the devastation.

Analysts and media said his visit had upstaged President Michel Aoun and Prime Minister Hassan Diab, already under immense pressure over why a giant stock of ammonium nitrate blamed for the blast was allowed to rot in the Beirut port for years.

Macron can now take what he sees as the natural role for France in leading the recovery of Lebanon, which was under French mandate from 1920 after the fall of the Ottoman Empire until independence in 1943.

"Eight historic hours of Macron the savior that shook the authorities," said the Lebanese daily Al-Nahar.

"Macron in Lebanon; Hope and slaps in the face," for the authorities, added the French language daily l'Orient-Le jour.

Macron, the first world leader to visit Beirut after the explosion, now plans as early as this weekend to host virtually an aid conference aimed at drumming up rapid help for Lebanon.

"Lebanon remains the principal stage where France has important weight," said Ziad Majed, professor at the American University of Paris.

"France speaks to all the Lebanese actors, unlike a good number of Europeans and the Americans, and also speaks to the regional actors including the Iranians and Arabs from the Gulf", he told AFP.

Even the German weekly Der Spiegel was impressed how Macron had seized the initiative and also stolen a march on the United States.

"It's a strong signal from Europe," it said, adding that France was "the only country in the EU which has true geopolitical ambition and which displays it."

But despite the rapturous welcome in Beirut -- a refreshing break for a president who has struggled in popularity ratings at home -- Macron is still regarded by some with suspicion as the head of Lebanon's former colonial power.

And while France's historic and linguistic ties with Lebanon still give Paris clout, Macron will have to deal not only with the Lebanese leadership but also Iran and its regional foe Saudi Arabia who hold immense sway over the Shia and Sunni communities in the multi-confessional nation.

Iran wields great influence in Lebanon through Hizbullah, with whom Aoun's party has an alliance.

"Macron has nothing to give us except lessons that reflect a paternalistic mentality," said the daily Al-Akhbar, believed close to Hizbullah.

One of Macron's key pleas -- for an international probe into the blast -- already appeared to have fallen on deaf ears Friday when Aoun rejected such an investigation.

Stephane Malsagne, a historian specialized in Lebanon, said Macron had to deal with regional factors over which he has lesser influence, notably the role of Iran.

"Political stability in Lebanon does not just depend on its political class but on regional parameters," he said.

France!!? Macron a leader!!?? Ahhhh a leader that go to Lebanon to weaken the cristhians and support the whaabism political...Macron gonna roubed political powers to the cristhians and give to Meca...look the next movements of Macron it s only to agradate Meca, France are Meca money dependent... Are the junkies for the saudis

although many Lebanese-Americans want an independent Lebanon, it is probably in the best interest of Lebanon to be governed by France for the next 10 years as proposed. You cannot trust any present or past Lebanese Politician. 100% of them must go. Rebuild Lebanon from ground zero. The country is gone thanks to Aoun, Nasrallah, Berri, Jumblatt, Frangieh,Micati, Senora , Geagea, Harriri, etc. ALL MUST GO! Only the people can do this through voting! Stop supporting corruption and stealing. Stop voting for these crooked politicians. France is the only neutral "player". Iran will favor Shiite, Arab Gulf will favor Sunni & U.S. will side with Israeli opinions. Everyone wants to "use" Lebanon for something so choose the lessor of all evils.

Now that we know that French President Macron tried to pressure US President Trump not to impose sanctions on Hizballah, we know exactly what change he and the French want.

Trico. Do me a favor please, can you decipher for me the last 2 lines of your garbage statement?