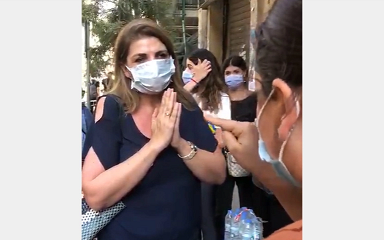 Two Lebanese ministers who tried to visit Beirut neighborhoods ravaged by the deadly blast at the city's port were chased out by seething volunteers clearing up debris in the days after the cataclysmic explosion.

The shock at Tuesday's blast has turned to public rage directed at the political class, already accused by many Lebanese of rampant corruption and incompetence.

Education Minister Tarek Majzoub sought to change that perception on Friday, bringing a broom to the ruined Karantina neighborhood to join crowds sweeping up shards of glass and other debris.

But he was met with furious chants of "Resign," "The people want the fall of the regime," and "Prepare the gallows!"

Although the explosion's exact cause remains unclear, the Lebanese public has accused the entrenched political class of failing to protect civilians and falling short in the relief response.

Officials have said a huge shipment of hazardous ammonium nitrate had languished for years in a warehouse at the port and somehow caught fire, leading to Tuesday's earth-shaking blast.

On Thursday, Justice Minister Marie-Claude Najm had tried to walk through the Gemmayzeh neighborhood, a few hundred meters from the port.

"Minister of corruption, not minister of justice!" chanted young people who were volunteering to clean up the hard-hit district.

"If you had any honor, you'd resign," one woman yelled, her face twisted in rage.

Majzoub and Najm are freshmen in Lebanese politics, joining a cabinet that has only been in power since January.

But they have not been spared from the public outrage following the port catastrophe.

French President Emmanuel Macron had visited Gemmayzeh too, wading through throngs of people displaced by the explosion or helping clear the rubble.

A day after the blast, former prime minister Saad Hariri had toured the remains of the port before heading to his father Rafik tomb.

The elder Hariri, who also served as premier, was assassinated in 2005 and is buried in downtown Beirut.

During Saad's visit, an enraged woman kicked and slammed her fists against a car in his convoy.

The younger Hariri resigned following a mass protest movement launched in October, which has since dimmed due to the coronavirus pandemic.

But the port blast has reignited calls to oust the political elite, with new protests planned for Saturday afternoon with the slogan, "Hang them by the gallows."

ٱللَّٰهُ أَكْبَرُ — this is how all citizens should deal with these criminals!

Bring the Guillotine. Nothing else will work. If you don't you will never stop being slaves.

Did they treat Hariri with insults and below the waist bad word like they did to both monsters. No! That only indicates one thing..sad Lebanon.

You’re the sad sectarian pos. A woman not only insulted him but she also trashed his car as he was driving. You deserve the same fate because your kind is Lebanon’s cancer.

Why did they let them leave they should hung them on the spot. Hariri and all...

Bring on the guillotines. The ropes are too nice for this bunch.

what a HUUUUUUUUUGEEEEEEEEE atack against the Catholic Civilization in Beirute...after what happening to the Cristhians in Iraque....and the silence of the West...

The filthiest of habits, spitting, would be totally justified when it comes to responding to anything from any Lebanese politician or hizbi 'leader'.