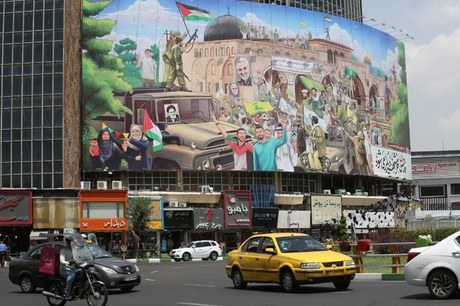 A Lebanese man and his daughter were shot and killed in northern Tehran by an unknown assailant on Friday night, Iran's Mehr news agency reported.

The two were "Habib Dawoud, 58 years old and his daughter Maryam, 27, who were murdered around 9:00 pm (1630 GMT) by an unidentified motorcyclist," the agency said on Saturday.

They were shot on Tehran's uptown Pasdaran street, it added.

Quoting a source in Tehran's police, Mehr said the two were in a vehicle and were "shot four times from the driver's side".

The source said Dawoud was a history teacher.

The police are yet to issue an official statement.

nutcase iran do you really expect anything dofferent from these cave men.

Lebanese Christians are NOT safe in Iran or any other predominantly Muslim country with the exception of Dubai, Qatar & Jordan!SO STAY AWAYFROM OTHER PLACES WHERE YOU ARE HATED BY YOUR RELIGION. Unfortunately, this world is no longer safe and people lost LOVE for one another. With as many problems Lebanon has, at least there are at least 14 religious denominations & political parties, so the Lebanese people are MORE tolerate of differences than others in the world. ITS ONLY FAULT IS CORRUPT POLITICIANS STEALING ALL THE COUNTRIES ASSETS. Coming soon,there will be a revolution where all these "famous" families will NEVER be respected again and when one hears their family name, "WE SPIT ON THE GROUND" with disgust for these dishonest thieves! They make us sick to our stomach...