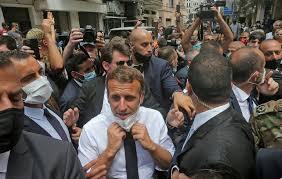 French President Emmanuel Macron on Sunday hosts U.S. President Donald Trump and other representatives for a U.N.-backed virtual conference to drum up aid for Lebanon after the devastating Beirut port blast.

Macron on Thursday became the first world leader to visit Beirut after Tuesday's explosion and warned Lebanese leaders that while international aid would be forthcoming deep change was needed to resolve the country's problems.

The blast at the Beirut port, blamed on a vast store of ammonium nitrate that was allowed to rot for years in a warehouse, destroyed entire neighborhoods.

It has amplified the anger of many Lebanese against a ruling class allegedly mired in corruption and cronyism.

Macron will be hoping that pledges made at the video summit, which begins at 1200 GMT, will be translated into concrete donations and the funds spent transparently and for the right purpose.

Speaking in Beirut after his visit on Thursday, Macron said that the conference aimed to mobilize funding from Europe, the US and regional states to provide medicine, care, food, and housing.

"We will also put in place clear and transparent governance so that all of this aid -- whether it is French aid or international -- is directly chanelled to the people, to NGOs, to the teams in the field who need it, without any possible opacity or diversion," he said.

He said that the need for profound change meant "it is the time of responsibility for Lebanon today and its leaders" who required "a new pact with the Lebanese people in the coming weeks."

Prime Minister Hassan Diab said Saturday that he would call for early elections.

Trump, confirming his attendance at the conference, tweeted that "everyone wants to help!"

A French presidential source, who asked not to be named, said that the EU, Britain, China, Russia, Jordan and Egypt would all be represented, although it was not immediately clear at what level.

Key Arab states in the Gulf, including Saudi Arabia, Qatar and the UAE are expected to take part but Iran, which wields huge influence in Lebanon through the Hizbullah, had not shown a desire to participate, said the official.

Echoing Macron's comments in Beirut, the official said that "it is necessary that this is not a blank check for the Lebanese government," adding that "it is not a question of how much is raised but how efficient it is."

Macron, who will host the conference from his summer residence on the Mediterranean, had also underlined he would be returning to Lebanon on September 1 to check its progress.

In a new sign of the anger, a group of protesters led by retired Lebanese army officers stormed the foreign ministry during a mass anti-government demonstration on Saturday.

The demonstrations show the "exasperation, distress of the population and need for things to change," said the French official.

Mt Macron, sure the Lebanese people need money. All this is futile if the system isn't changed it will merely be another cycle. Call the iranian cave men in iran and call those dogs off and say hands off Lebanon. That's all that will work. Then get the warlords out of the picture, berri, nassi,raad, imbasil, syaed, arslan and wahab to start with....the 1st grade danger dogs...then there is a 2nd grade and a 3rd to be worked through progressively.

The Lebanese people do not need money. The Lebanese people need food, materials and workers to rebuild their country. They all know that if the aid arrives in the form of money a good portion of it will end up lining the private pockets of the politicians as well as the coffers of Nasrallah and his Hizballah terrorists.

they say that the atack to Beirute came from the mediterranic sea...if the evangelicals USA wants to destroy the catholics in Brasil imagine in Lebanon...

Not even sure what useful purpose a single threaded simple minded creature can serve.
Ah yes, get paid for spewing rubbish when Lebanon is at an existential crossroads.
If you truly believe that crap, then as a Christian myself humbly request you STFU!