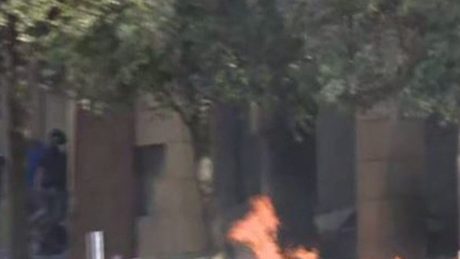 A policeman died during Beirut's protests on Saturday, following an assault by "murderous rioters," the Internal Security Forces said.

"A member of the Internal Security Forces died while ... helping people trapped inside the Le Gray hotel," the police force said on Twitter.

It "came after he was assaulted by a number of murderous rioters, which led him to fall and die," the statement added, without providing additional details.

And the government murdered and has been murdering as did the syrians and the hizbi pigs...so your point is if a police man dies exactly what?

After the General Directorate of Internal Security Forces announced the martyrdom of an internal security force during a security and order operation while assisting detainees inside Le Gray Hotel, after being attacked by a number of riot killers, which led to his fall and martyrdom.

Logray hotel manager revealed that the martyr died of an accident and the protesters have nothing to do with the subject.

In a talk to Al-Hadith Channel, he explained: ′′ The martyr leaned on the door of the elevator, as a result of the explosion of Beirut to rest and turn around what led to the sixth floor ", which confirms that the protesters did not push the security forces component ".

Decent cops and army men should refuse to participate in the repressive measures against anti corruption demonstrators. As for Berri’s imperial guard, they can all die, they’re all Amal militiamen.

the first vitim after Macron efects in Lebanon...when the dogs of meca and druzes atack the foreign ministery...the Message of Macron was clear...

No friends, NOT OK.
We’re asking the armed and security forces to side with us, how's killing one of them, even more so justifying it, help our cause?

Always with the conspiracy theories, maybe and maybe not
What’s for sure is that we’re fed up