For Heartbroken Lebanese, Dubai is 'New' Beirut of Old 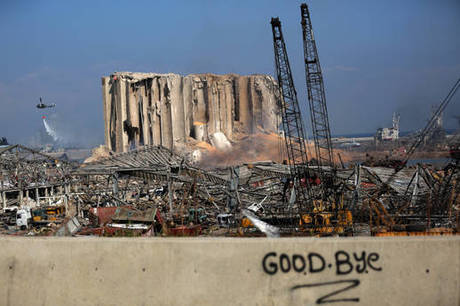 Just days after the enormous blast that shattered Beirut, Ali Hammoud found himself looking down on the rubble from an airplane window, leaving behind his family and hometown.

Born and raised in Lebanon’s capital, the 30-year-old IT engineer finally decided to head for Dubai after the explosion destroyed his last hopes of ever seeing Beirut prosper.

"It's not easy at all, but I had to finally leave. I feel I've betrayed the city I love to death, but there is nothing left for me there except depression," Hammoud told AFP after arriving in the wealthy Gulf emirate.

"Now I can start a professional career, live in peace and send money back to my family," said Hammoud who had spent a year looking in vain for work before the August 4 disaster that left more than 170 people dead and compounded Lebanon's financial crisis.

Like many of his compatriots longing for safety and stability, the young man has applied for a job in Dubai.

He joins tens of thousands of Lebanese who helped build a glitzy city that reminds them of their parents' tales of the glamour of old Beirut –- but with glimmering skyscrapers instead of Ottoman-era and French colonial villas.

Last week's explosion of a long-neglected stock of ammonium nitrate at Beirut's port ripped through the vibrant coastal city known for its rich history as well as legendary nightlife and cuisine.

The fact that Lebanese officials had long tolerated a ticking time-bomb in the heart of the Mediterranean city has served as proof to many of the rot at the core of the state apparatus.

"My aim now is to quickly overcome the guilt of leaving," said Hammoud.

"Dubai will be my new Beirut."

Long before the explosion, Lebanon was heading downhill fast.

The country was mired in its worst economic crisis since the 1975-1990 civil war, with runaway inflation and bank capital controls fuelling poverty, despair and angry street protests.

Political life in the multi-confessional country has been dominated for three decades by former warlords who exchanged their military fatigues for suits.

Among Sunni Muslim, Christian and myriad other groups, the most powerful force is the Shiite Hezbollah movement.

After years of systematic corruption, unsolved assassination cases, wars with neighbouring Israel, and lack of basic services, many Lebanese now see the country's elite as fighting over the spoils.

They are viewed as beholden to their personal and sectarian interests, rather than the good of the nation of six million.

"I can't explain how frustrated I am. I had to leave my country years ago because of those warlords. They stole from us and now they kill us?" said Firas Rachid, a 31-year-old salesman who has lived in Dubai since 2016.

Beirut, once famous for top educational and medical establishments, has lost much of its pre-civil war identity, its reputation as an oasis of enlightenment and for its "joie de vivre".

Millions of Lebanese, from doctors to engineers, to teachers and other professions, have emigrated over the years, seeking a better life in the Gulf and beyond.

Some 350,000 Lebanese now live and work in the six Gulf nations, more than 100,000 of them in the United Arab Emirates alone, mostly in Dubai.

- Paris of the Middle East -

"Why Dubai? We drive in lanes here, we don't fear militiamen holding guns to our heads, we have basic services, and we get paid well," said Rachid.

"My parents always describe Beirut as a hub for the region in the '60s and '70s, but this is exactly what Dubai is now."

In his book "My Story", Dubai's ruler Sheikh Mohammed Bin Rashid Al Maktoum recalls his first visit to Beirut, years before the civil war that brought the "Paris of the Middle East" to its knees.

"In the early 1960s, its streets were clean, neighbourhoods beautiful, its markets modern. It was a source of inspiration for me. I had a dream for Dubai to become like Beirut some day," he wrote.

Decades later, Dubai has become a magnet for millions of Arabs whose countries have been ravaged by poverty and conflict.

Jordanians, Palestinians, Moroccans and others have opted to instead build their future in the desert city.

It does not have the history or cultural heritage of their homelands, but for many it is a fair tradeoff for peace and financial security.

At a basketball game in Dubai last year between two Lebanese clubs with different sectarian ties, there was no violence, no sectarian chants, only the slogan: "Three, two one! We are one!"

Dubai ? New beirut ?
You mean fake dubai ? you know dubai where there is 0 history ? where all i fake ? no heritage? no local culture ?
New Beirut ?
Nothing will replace beirut... and if there is a city somewhere that might replace it... it certainly isnt dubai.

At least Beirut has a soul! Dubai has been built by the Lebanese diaspora. Couldn’t they just come back here and invest the brains into the country that bore them.

No if they came back they would go back to their wicked old relgious ways of segregations and hatred something they could not do in Dubai....

This country's salvation is the total wipeout of Hizbos, or under complete control of France. No other way around it.

Many relatives who live abroad sent the money to Lebanese banks , how did they repay them? The banks stole them! Fool me once shame on you, fool me twice shame on me.... this time it’s done.... unless there’s a real political and constitutional change not to mention the end of Hizbala’s weapons, main vector of instability.