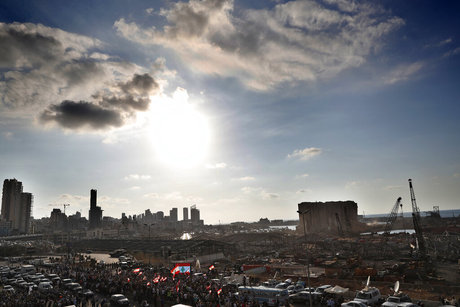 "The interrogations will begin with former public works minister Ghazi al-Aridi," the official said, speaking on condition of anonymity.

"If a shortcoming or negligence on the part of one of the questioned ministers is found, the judiciary will have to state that it does not have jurisdiction to sue them," the official explained.

The chief prosecutor will then have to transfer their file and connected evidence to parliament because the jurisdiction lies with a special council in charge of suing ministers and presidents.

The official said the current minister of public works, now working in a caretaker capacity because the government has resigned over the August 4 explosion, would also be questioned in coming days.

Several other former public works ministers, current and former ministers of finance and justice, will also be brought in, he said.

The explosion, Lebanon's worst peacetime disaster, caused devastation across Beirut and is widely seen as a direct consequence of state incompetence and corruption.

Prime Minister Hassan Diab's government resigned on Monday but that did little to appease protesters who want heads to roll over the disaster.

Documents seen by AFP reveal that relevant officials at every echelon of the state were aware of the danger posed by the large pile of ammonium nitrate stored for years in a port warehouse until it blew up.

Must start with Hariri

All Smoke in mirrors. The People need to go and pull all these criminals from where ever they are, put them in a dark hole, until all the money is returned and than hang them. KSA was kind in getting the looted money back, they put them in a 5 star hotel and tortured the hell out of them until they returned what they stole, these criminals are worse than the Saudis and deserve worse than that...

This “Lebanese prosecutor” owes his job to the rotten and nefarious ruling class. There’s nothing to be expected from Lebanese investigations.

Why aren’t the current and former presidents mentioned for questioning?

Suleiman was already the former president by the time the ammonium nitrate was unloaded and placed in hangar 12.

I hope they don't forget to offer him coffee and cake.