Beirut Blast: Who Knew What, When? 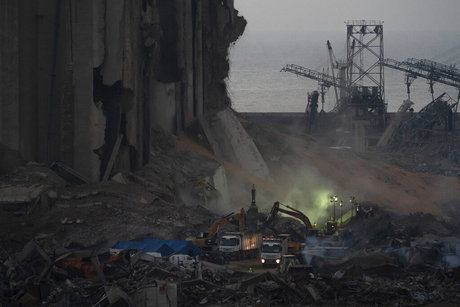 Up until the eve of the deadly Beirut blast, Lebanese officials exchanged warnings over a dangerous chemical shipment in the port, but did nothing despite experts' fears it could cause a massive conflagration.

On August 3, a day before a huge stock of ammonium nitrate exploded and ravaged swathes of Lebanon's capital, the public works minister received a letter.

It came from the Supreme Defense Council and alerted him to a large quantity of ammonium nitrate -- a dual-use chemical compound used mainly as a fertilizer -- stocked in a warehouse at the port.

"I was informed 24 hours before the explosion, when I got a letter from the Supreme Defense Council," Michel Najjar, now a caretaker minister after his government resigned over the blast on Monday, told AFP.

The letter was dated July 24 and took 10 days to reach Najjar because many government offices were closed due to coronavirus lockdown measures and the Eid al-Adha Muslim holiday.

The minister asked his adviser to get in touch with Beirut Port general manager Hassan Qureitem, who was arrested after the disaster, and request that he send all relevant documents.

Having ignored warnings over the potential danger of the ammonium nitrate from State Security, one of the top security agencies in the country, the port authorities took action a day after the minister's adviser called.

They sent a technical team to warehouse 12 at the port to plug a hole in the southern wall that was leaving the highly volatile -- but also highly valuable -- chemical compound exposed.

According to a security source, the maintenance work may have started a fire that triggered the cataclysmic explosion that shook the entire nation at 6:08 pm (1508GMT) on August 4.

According to health ministry figures, at least 171 people were killed and around 6,500 injured by the blast that disfigured Beirut.

On July 20, President Michel Aoun and Prime Minister Hassan Diab received a letter from State Security warning them of the threat posed by the ammonium nitrate.

The vessel carrying the compound had set off from Georgia in 2013 and, although Lebanon was not its final destination, the dangerous cargo was seized when the ship encountered technical problems in the Mediterranean.

Aoun told reporters on Friday he had passed on the letter to the Supreme Defense Council, which in turn sent it to the public works ministry.

"I am not responsible, and dealing directly with the port is not among my prerogatives, there's a chain of command that should know its duties," he said.

"Several governments and officials came and went, and the relevant authorities at the port warned them" about the ammonium nitrate, said Aoun, a main hate-figure in the protests staged in the capital since the blast.

Najjar drove the same idea home and said "several exchanges have taken place between the judiciary, State Security and port management" over the chemical cache.

The ammonium nitrate was stored in a warehouse reserved for confiscated goods. It also held "gun powder, fireworks and pots of paint," all of them highly flammable products, a security official told AFP.

State Security had launched an investigation into the contents of the warehouse in January.

Its report seen by AFP said that "dangerous substances used to manufacture explosives" were stored in the warehouse and that "liquid substances of the nitroglycerin type was seeping" from the premises.

The State Security report also warned that a breach on the southern side of the warehouse exposed the dangerous cache to theft.

It quoted a chemistry expert, who had visited the site, as warning that "these substances, if they caught fire, will cause a huge fire that could almost destroy the port."

In its letter, State Security stressed that the port authorities were guilty of "negligence" and failing to comply with safety standards and procedures.

Head of Customs, Badri Daher, who was arrested after the blast, released before being detained the text of a letter he had sent to a judge in December 2017.

In this letter, he renewed a request to export or re-sell the ammonium nitrate, which no one else seemed to want to do.

According to a security source, the General Security agency had warned of the hazard posed by the cargo in a letter sent in 2014 to the president, the prime minister and the ministers of interior and public works.

only Hariri do not know nothing about the ammonium nitrate...

I was telled that mme berrys and heznallah reeltors wantsted to bye the houses in bombsed Beirut araes Cristhian Catholics. This not is convert or die. Beirut was shia now shia bye back shia houses. facts are facts.

"On July 20, President Michel Aoun and Prime Minister Hassan Diab received a letter from State Security warning them of the threat posed by the ammonium nitrate"

Why were these letters sent only a few days before the blast? Had they not informed them before?

Who exactly knew about the existence of the chemical cargo during these 6 years and what did they try to do about it?

So you have proof they and only they are the ones who knew about it for 6 years? I am not a hizbi supporter but i do find it disgusting how some here sit and whine all day and act superior to them in every way when they are the ones who managed to grab so much control over lebanon. I also cant stand how ppl will condemn one dirty leader/group while supporting another dirty leader/group. I believe that hizb, but not only they, have a lot to answer for. Do you blame the mismanagement of the lebanese governments (not just this government) on anyone other than the hizb?

Ya Samir... ya habibe...
We know nothing... and only little hands will end up incriminated in this affair.
The ONLY thing that we are sure of... is that you cannot fart in the port without Ebola knowing about it. The port is theirs. They run it, they rule over it, their people administrate it. So however you want to spin things around... you will find one... big.. fat responsible for what happened: EBOLA!

Shia pos! The explosion happened during Michel Aoun's presidency and not in 2014!!!! lmao!

Galaxy. I am not shia but i am Muslim if you must know. The fact that it happened during aouns presidency doesn't mean much since nobody knew at what time it was going to explode. I honestly can't remember who was president, pm and the ministers in 2014 so i wasen't trying to incriminate any side in particular. All who knew about it and did nothing if they had the means to do so are responsible.

I didn't listen to what he said. Can't stand their speaches

These investigations and assessments are irrelevant, and the details are meant to blur the mind and shift our thinking away from the root cause of the systematic destruction. Wake up people! You are all responsible! Rise from the ashes and march towards their palaces and drag them down to the streets!

So in other words they deserve it and status quo? No, the vicious circle has to be broken, repeatedly, until they awaken.

Samir8 let it go..This is sad and sick society whatever you say no one will listen. why bother! read their posts and let it go.

This is the impression i got from the usual naharnet commentors. Its like talking to a wall. No balance, no real interest in the truth. Its all about how to use it to ones own preferred narrative