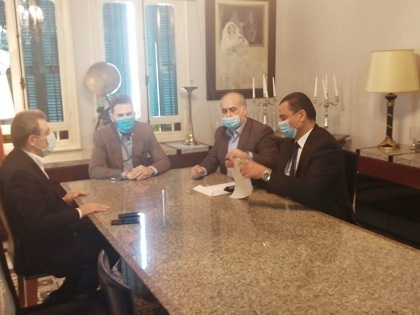 Jumblat chaired the Democratic Gathering meeting at his Clemenceau residence.

The petition demands international investigation into the colossal explosion in Beirut that killed at least 171 and wounded more than 7,000 on August 4.

Aoun should have asked macron before they altered the crime scene.

Nothing surprising here. According to seismologists recording data in the Mediterranean Sea, Six blasts ahead of the main explosion were spaced at 11-second intervals.

The first five blasts, each of a magnitude consistent with several tonnes of explosives going off, may have taken place underground and gone unheard by Beirut witnesses.

Such a sequence could be consistent with "weapons systems that are activated in a chain" and which might have been stored in the port and detonated accidentally, or set off deliberately in an act of sabotage.

Another indication of underground explosions, was the 43-meter depth of the crater left at the port, which, could not have been created by the explosion of the amount of ammonium nitrate reported by Lebanese authorities.

Hizbala is behind this crime against humanity and Lebanon.

hizbi cave men are the root of all evil in Lebanon and the Middle East. This is the chance and excuse to wipe their asses off this earth. They are useless war mongering animals with a sheep following consisting primarily of Lebanons most uneducated and lowly socio-economic community. They wear poorly fitting irannian guard uniforms and they love the colurs yellow and black. They also love the airport road light posts where they hang the pics of drugged sheep who were killed and are "matyrs" apparently.