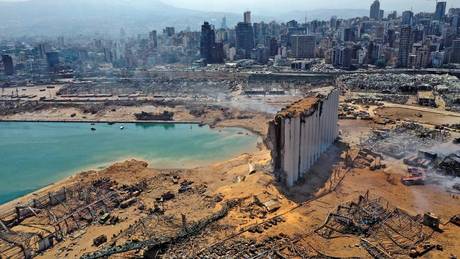 Investigation into the gigantic portside explosion in Beirut reportedly points to security shortfall that security services at Beirut port bear responsibility for, the Saudi Asharq al-Awsat reported on Friday.

Sources following the investigation told the daily: “The security apparatuses with wide influence in Beirut port bear much responsibility,” for the blast that killed 171 people.

The sources assured that punitive “measures will be taken against anyone proven to be involved due to negligence, intent, or mismanagement, given the magnitude of the disaster caused by the explosion, the huge number of victims, and the destruction of the capital.”

On Thursday, the Supreme Council of the Judiciary agreed to the appointment of Judge Fadi Sawan as a judicial investigator in the port blast probe that will be handled by the Judicial Council.

The August 4 blast has killed 171 people, injured thousands and reignited street protests demanding the ouster of the entire political elite.

The explosion was a result of a massive shipment of ammonium nitrate fertilizer, a powerful explosive, that was left to languish for years in a port warehouse despite repeated safety warnings.

Investigation found that right up until the eve of the blast, officials had exchanged warnings over the cargo, but did nothing -- despite experts' warnings it could cause a major disaster.

Lebanon's parliament on Thursday declared a two-week state of emergency in Beirut after the gigantic explosion.

-signed the same politicians who are in control of the investigation

nothing to see here !

God bless hezbollah aka the Lebanese Army for making sure there were no security shortfalls at our beloved port.