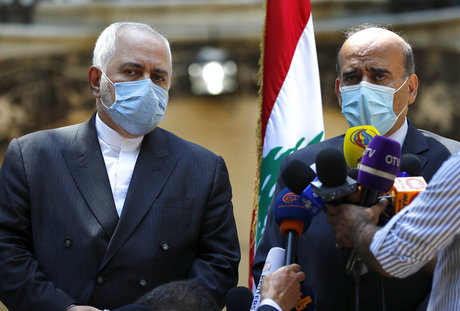 Foreign Minister Mohammad Javad Zarif of Iran, which backs Lebanon's powerful Hizbullah, met officials in the capital ahead of a speech by Hizbullah chief Sayyed Hassan Nasrallah at 1730 GMT.

Both Hale and Parly have joined calls from the international community for a reform-oriented government that would coordinate aid flooding into the crisis-hit Mediterranean country after the resignation of Prime Minister Hassan Diab's cabinet on Monday.

Zarif said it was for the Lebanese to decide what government they wanted.

"Others should not condition their aid on any change in Lebanon during this emergency situation," he said.

Zarif joined Lebanese officials in rejecting an international probe into the blast, saying "Lebanon, as an independent country, must be in charge of the investigation."

Protesters filled the streets and clashed with security forces in the days after the August 4 explosion, blaming their political leaders for the negligence they say led to the disaster that killed 171 people and wounded at least 6,500.

The blast happened when a huge stock of hazardous materials stocked in a warehouse in the heart of the capital for years exploded, despite repeated warnings of the risk it could cause.

The explosion revived a street protest movement that had first erupted in October last year against government corruption and a lingering economic crisis.

Diab's successor must be named by President Michel Aoun, the target of increasing vitriol from protesters, after binding consultations with parliamentary blocs representing Lebanon's longstanding political parties -- the very ones that the protesters want to see gone.

Hale and Parly met Aoun separately on Friday and both have called for a government that reflects the will of the people and one that would implement reform.

Overseeing the distribution of aid from the helicopter carrier Tonnerre, which docked in Beirut with food and construction materials, Parly said she urged Aoun president to speed up the process of government formation.

Parly said the next government must have a "mission" and "for a limited period of time be in charge of carrying out far-reaching reforms."

Hale echoed her calling for a government "that reflects and responds to the will of the people and genuinely commits and acts for real change."

Aoun said he was in talks with top political blocs before formally starting parliamentary consultations to name a new premier.

The new administration will take power in a country that was already battered by crisis before the explosion, with crushing economic woes and widespread discontent at official corruption and ineptitude.

Lebanese authorities named judge Fadi Sawan, with a reputation for independence and integrity according to judicial sources, to lead investigations into the explosion.

But he will not himself question current and former ministers on the ammonium nitrate that was stocked at the port.

They will instead be referred to a special judicial body specialized in questioning government officials.

On Thursday, Hale said the U.S. Federal Bureau of Investigations would join the probe "at the invitation" of Lebanese authorities.

France, which on Friday confirmed that two French citizens were among the 171 people killed in the blast, has opened its own inquiry.

U.N. experts have called for a prompt and independent investigation into the explosion, expressing concern at the "impunity" they say Lebanese officials enjoy.

Friday rescue workers continued to recover the remains of those killed in the blast at the devastate Beirut port.

Relatives of three firefighters from the same family, who had tried to put out a fire that flared before the blast were told that the remains of two of them had been identified by DNA analysis.

"I don't have words to describe the fire that consumes us. Imagine getting to the point of being happy to have found the remains of two among you," said Antonella Hitti on Facebook, after learning that the remains of her brother Najib, 27, and her cousin Charbel, 22, had been identified.