Beirutis Find Comfort in Reuniting with Pets Lost in Blast 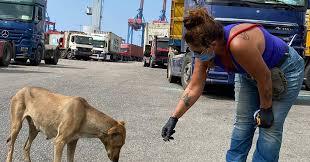 A tearful young Lebanese woman clutches her cat to her chest -- like many Beirutis, she was relieved at being reunited with her pet after the blast that ravaged the capital.

Pets have been a source of solace for many of the hundreds of thousands of people affected by the August 4 explosion that ripped through Beirut.

The monster blast at the port shattered glass and sent debris flying, killing over 170 people and injuring at least 6,500 others across the Mediterranean city.

In the chaos that ensued, many pets, some of them also hurt, bolted from their homes.

Yandi Sfeir, a 38-year-old lawyer, was injured and had to rush to hospital, where she received six stitches in the arm.

When she returned home, her cat Lucky had disappeared.

Volunteers with an animal rights groups, Animals Lebanon, which has led efforts to reunite pets with their owners, helped retrieve Lucky.

"I hoped that someone had found him and was taking care of him. But the joy I felt when I saw him... it was like a weight had been lifted," Sfeir told AFP.

His presence has brought comfort as she struggles to process the trauma of the disaster, she said.

"I still feel the vibrations that preceded the explosions. I'm always worried that something is going to happen."

In the days since the blast, Sfeir said struggled to sleep at home alone, asking her mother or friends to keep her company.

Lucky "will help me sleep at home again," she said, adding that the cat too had changed -- jumping at the slightest noise.

Lucky was one of over 100 pets reunited with their families, according to Animals Lebanon, thanks to the efforts of charities and hundreds of volunteers.

"Animals have this beautiful effect on people, a therapeutic effect, and these people are so happy when they see that their animal is still alive, it's as if they forget that they have lost everything," Maggie Shaarawi, vice-president of Animals Lebanon, told AFP.

Dodo the cat, now in the care of Animals Lebanon, "was so traumatized when we found him the first time that he jumped off the balcony again," Shaarawi said.

The catastrophe "brought out everyone's compassion for all living beings and it's something really beautiful, people are united on so many fronts."

For the hundreds of thousands of Lebanese whose homes were damaged, many to them left unlivable, pets are a "last link to their home", said Kamal Khatib, a volunteer.

The group has already reunited dozens of owners with their dogs and cats, he said. "It’s an amazing feeling to watch them meet again."

For a min there I thought that was a pic of nassrallah being fed.