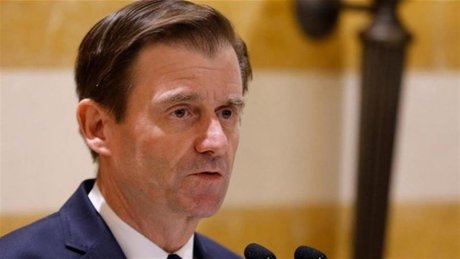 US envoy David Hale called Saturday for a "transparent and credible" probe into the monster blast at Beirut's port, as FBI investigators headed for Lebanon.

Hale said an FBI team is expected to arrive in Beirut by the end of this week to partake in the investigations.

“They will be playing their role in order to make sure the answers of all the Lebanese people, and all of us have, about what exactly happened and what led to the circumstances of this explosion,” said Hale to reporters.

“We really need to make sure that there is a thorough and transparent, credible investigation that everyone is demanding," he added while touring the blast site on the final day of a visit to the crisis-hit country.

“Stepping back from whatever happened specifically related to this explosion is that we can never go back to an era in which anything goes at the port and the borders of Lebanon that had to contribute to this situation. Lebanese people will have to determine how best to do that. But every sovereign state controls its borders and ports thoroughly,” emphasized the US envoy.

A huge stock of hazardous material abandoned in a warehouse at the port in the heart of the capital exploded on August 4, killing 177 people and devastating swathes of Beirut.

The hundreds of tonnes of ammonium nitrate had been left unsecured for several years, despite repeated warnings of the dangers it posed.

The disaster led to demands at home and abroad for an international investigation, calls that have been rebuffed by Lebanon's political leaders, widely accused of negligence that led to the explosion.

The explosion reignited claims that Hizbullah, which is designated by Washington as a terrorist group, stored arms at the blast site.

Thank you Mr Hale. God Bless USA. Please don't abandon us. The alternative is there for you to see.

I wonder if the foreigners who come here to help investigate are aware that the officials they are talking to are part or cause of the problem?

Yeah and my grandma was queen Victoria!

The evangelicals do not trust in the Arab cristhians!!!

We the cretins of portugal trust in the Arab cretins and the cretin president of lebanon!!!

kizb and aoun aren't going to be happy---they like being in charge and giving us no answers.

We welcome the FBI investigation team and we hope to conclude this and get an answer in less than 3 months, or else it would be a lost cause. The hariri investigation is the latest example.

If fear that if Biden is elected in November, US policy towards Lebanon and the rest of the Middle-East, will be different.

He would have to answer to anti racist progressives so yes Shimon he will be less controlled by Zionist billionaires.

It's too bad how people forget, and how easily they are manipulated by this worthless media that just keeps adding fuel to the fire. As if Hale Mary and Macaroni descended from the heavens onto Lebanon to save the world! People gotta WAKE UP!