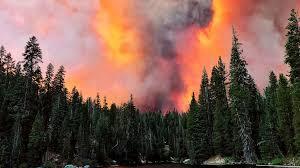 Dozens of people were airlifted to safety Saturday night after being trapped by a wildfire near a popular reservoir in northern California, officials said.

Military helicopters have so far rescued 63 people from the Mammoth Pool Reservoir in the Sierra National Forest, about 45 miles (70 kilometers) northeast of Fresno, the Fresno Fire Department said on Twitter.

Two were severely injured and 10 had moderate injuries, it said.

"Aircraft are returning to continue rescue operations. Unknown how many more," the fire department said.

Madera County Sheriff's Office said around 150 were trapped at the popular reservoir.

"Emergency crews from multiple agencies need to focus on the critical task at hand -- rescue of the approximately 150 people sheltering-in-place at Mammoth Pool Boat Launch," the sheriff's office said on Facebook, warning people to avoid the area.

He said dozens rescued had been brought to California National Guard facilities and were met by military medics and civilian first responders.

The Creek Fire, which started on Friday in steep and rugged terrain, has so far spread to 36,000 acres and was zero percent contained, CalFire said.

The high temperatures come as the state is recovering from another heatwave in mid-August and devastating wildfires that have burned some 1.5 million acres in the last three weeks.