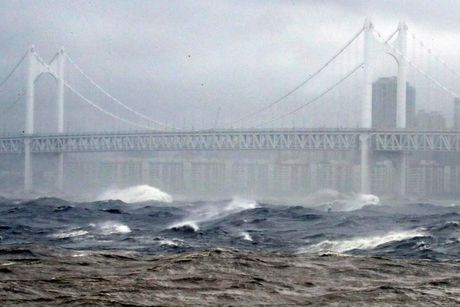 A powerful typhoon lashed South Korea on Monday after smashing into southern Japan with record winds and heavy rains that left four people missing in a landslide.

Half a million people were without power after Typhoon Haishen roared past Japan's southern-most main island of Kyushu, ripping off roofs and dumping half a metre (20 inches) of water in just a day.

Rescue workers were picking through mud and detritus after a hillside collapsed in rural Miyazaki.

Dozens of police officers were on their way to help, Chief Cabinet Secretary Yoshihide Suga told reporters in Tokyo.

At least two other deaths had been reported during the storm, he said, although the causes were not immediately known.

Haishen, which came on the heels of another powerful typhoon, crashed into Okinawa on Saturday and moved northwards throughout Sunday.

Around 1.8 million people were told to seek shelter, for fears that the 200 kilometre-per-hour (135 mile-per-hour) winds would wreak havoc on Japan's  wooden housing stock.

By lunchtime on Monday, the system had moved over South Korea, forcing the cancellation of hundreds of flights, and sparking landslides.

Traffic lights and trees were felled in and around Busan, streets were flooded and power was knocked out to thousands of homes.

Haishen was churning its way up the eastern side of the peninsula into the Sea of Japan, known as the East Sea in Korea, having lost some of its destructive force, but still packing winds of up to 126 kilometres per hour.

Haishen was forecast to make landfall again in Chongjin, North Hamgyong province in North Korea, at around midnight, according to South Korea's Meteorological Administration.

North Korea is still reeling from the effects of Typhoon Maysak last week.

Leader Kim Jong Un appeared in state media over the weekend, where he was shown inspecting the damage. He also sacked a top provincial official in South Hamgyong.

He ordered 12,000 ruling party members in Pyongyang to help with recovery efforts, and the official KCNA news agency reported Monday that around 300,000 had responded his call.

The North's state media have yet to specify how many people Maysak left missing, injured or dead.

In Japan, Typhoon Haishen first made its presence felt on a string of exposed, remote southern islands before sweeping past the Kyushu region.

As it approached Kyushu authorities issued evacuation orders for 1.8 million people, with 5.6 million others told to take precautions.

In some places, residents checked into hotels to shelter from the storm.

Hotel Polaris in Shibushi city, Kagoshima, said all 73 of its rooms were sold out for the weekend.

"This is a large building for our area. I think our guests have chosen to stay with us to feel safe," front desk employee Takayuki Shinmura told AFP, adding that it was unusual for all of the hotel's rooms to be occupied during typhoons.

Japan presses its municipal buildings and schools into action as shelters during emergencies.

But with fears over the Covid-19 pandemic, some people were reluctant to gather in large numbers.

"I am worried about coronavirus infections. We're with small children too, so we did not want other people to see us as big trouble," an elderly man in Shibushi city told NHK after checking in at a local hotel with seven relatives.

The storm forced the cancellation of nearly 550 flights and disrupted train services, the network said.

Haishen forced the Japanese coast guard to suspend its search for dozens of missing sailors from the Gulf Livestock 1 cargo ship that sank in an earlier storm.