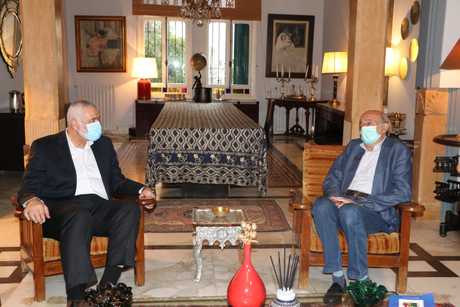 “We offered our condolences over the port martyrs and wished recovery for the wounded and Lebanon is capable of returning to stability and unity,” said Haniyeh after the meeting.

“We wish success for the talks aimed at forming a government and we hope Lebanon will become more stable,” he added.

“We are keen on Lebanon’s security, our people in it are part of the Palestinian people and our relation with Lebanon is clear and strong with all its components,” Haniyeh went on to say.

He added that Hamas does not interfere in Lebanon’s internal affairs and will not do anything that would “embarrass” the country.

“We reject normalization with the Israeli occupation,” Haniyeh said.

Jumblat for his part warned that Lebanon could “drown in further economic deterioration” and that “its political and economic fate” will be at stake if it does not form a new government as soon as possible.

“My advice to the brother Ismail Haniyeh is that the unity of the Palestinian stance is the most important thing no matter what the pressures might be, and I’m ready, with the capabilities I possess, to help and facilitate the essential right for Palestinian refugees to live in dignity, seeing as racial discrimination is unfair against them,” the PSP leader added.

Been telling you all not to ever trust this socialist Walid Jumblat. Changes his position by there hour depending how the winds blows.