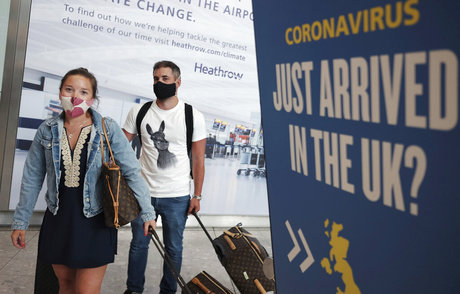 The UK government on Wednesday tightened coronavirus restrictions due to a sharp rise in cases, banning social gatherings of more than six people and making contact tracing mandatory in pubs and other venues.

Prime Minister Boris Johnson said the new "rule of six" in England would replace a raft of regulations he admitted were "complicated and confusing", and help reverse the upward trend of infections.

Britain has been hard hit by coronavirus, recording more than 41,500 deaths among people who tested positive -- the highest rate in Europe, and one of the highest in the world.

After a national lockdown imposed in March, deaths and cases fell and Johnson has in recent weeks been urging people to return to work and to go out and spend money, as Britain has been plunged into a historic recession.

But there have been almost 3,000 daily cases in recent days and new figures revealed a spike in coronavirus cases among young people in particular -- a trend seen elsewhere Europe.

"I wish that we did not have to take this step," Johnson said at a news conference to unveil the new restrictions.

"But, as your prime minister, I must do what is necessary to stop the spread of the virus and to save lives."

There will be exceptions to the new six-person limit, which will come into force on Monday in England only, including for large families, workplaces, weddings and funerals.

In another change, venues such as pubs and restaurants will be obliged to request visitors' details to allow contact tracing if necessary. Previously, they were only advised to.

Opening times could also be restricted, although for now this will only be in areas already subject to specific restrictions because of local flare-ups.

Johnson said that checks on people arriving from countries on the government's quarantine list would also be stepped up.

The Conservative leader, who is known for his optimism, did not repeat his previous suggestion that life could be back to normal by Christmas.

But he outlined a "moonshot" plan to allow millions of people to be tested every day to allow those without coronavirus to circulate freely.

"We are hopeful this approach will be widespread by the spring and, if everything comes together, it may be possible even for challenging sectors like theaters to have life much closer to normal before Christmas," he said.

A trial will be launched next month in Salford, northwest England, although he acknowledged "numerous logistical challenges" adding: "We're not there yet."

Johnson, who himself spent a week in hospital with coronavirus, has faced criticism for his approach throughout the outbreak, accused of introducing the lockdown too late and then lifting it too early.

The new testing goal is likely to raise eyebrows as the government is already struggling to meet soaring demand for tests.

Martin McKee, professor of European public health at the London School of Hygiene and Tropical Medicine, told the BMJ the plans bore the hallmark of a government "whose ambition far exceeds its ability to deliver."