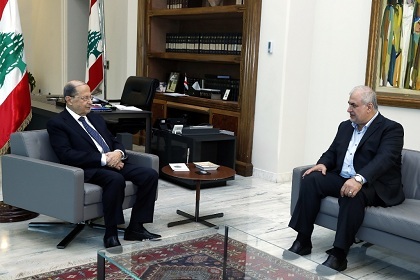 President Michel Aoun resumed consultations on Tuesday with representatives of the country's parliamentary blocs over the formation of the cabinet, a process which hit snags because of controversy over the principle of rotation of ministries and the finance ministry portfolio.

On Monday, Aoun kicked off two-day consultations after a key meeting with Prime Minister-designate Mustafa Adib.

Adib had met Aoun on talks on forming a new government, but did not submit proposals for a cabinet despite a looming French-imposed deadline.

He met Monday with Jebran Bassil of the Strong Lebanon bloc, Samir al-Jisr of the al-Mustaqbal bloc, Faisal Karami of the Consultative Gathering bloc, Farid al-Khazen of the National Bloc and Asaad Hardan of the Social National bloc.

Despite reports that the President and PM had agreed each to hold talks with certain blocs, LBCI television said no reports emerged that Adib held meetings with any of the lawmakers.

The insistence of the Shiite duo of AMAL Movement and Hizbullah on retaining hold of the Finance Ministry, and the principle of rotation of portfolios are the major hurdles.

I really wonder whether Macron believes that the change he's talking about can be achieved with the existing players. If he does then he is not well informed about the Lebanese political wasp nest.