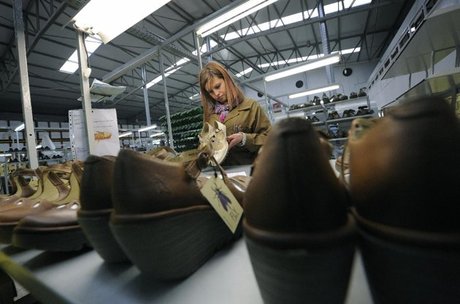 Amid all the gloom and doom over debt-stricken Portugal there is a ray of light -- shoemaking, one of the oldest and most traditional industries, had a record year in 2011 on strong exports.

The shoemaker companies, which sell nearly all their production overseas, registered 17 percent growth last year, according to industry group APICCAPS.

Exports continue to drive growth, with 95 percent of output going to some 130 countries, especially in northern Europe where Portuguese footwear has established markets under a slew of eye-catching brands.

Dkode, Nobrand, Camport, Eject, Mack James, Softwaves, Fly London -- the names are all chosen to have an Anglo-Saxon ring to them so they stand out in a very competitive market.

Kyaia, which markets its Fly London brand worldwide, posted sales of 50 million euros and employs over 500 people in a Portugal which was bailed out last year by the EU and International Monetary Fund, joining Greece and Ireland on the eurozone casualty list.

"More than 90 percent of our production is destined for export," said Fortunato Frederico, a former ordinary worker who has made Kyaia one of the country's top shoemakers, standing in front of a table covered with different models of the marque which mixes classic with modern styling.

The shoemaking industry is concentrated in northern Portugal's Minho region and is made up of mostly small- and medium-sized companies which have managed to survive despite the challenges from Asian competitors.

Unlike the textile industry, which has suffered badly from the economic slowdown and cheaper products made in Asia and other emerging markets, 'Made in Portugal' shoes have held up well, fighting alongside their Spanish and Italian rivals to hold on to market share.

The industry in all groups 1,300 companies and employs about 40,000 people, making 70 million pairs of shoes annually.

It went through a painful restructuring in the 1990s, with companies diversifying their brands, investing in new technology, upgrading workforce skills and spending on international promotion, said Kyaia's Frederico

In the current crisis, the industry is often held up as an example of what can be done in an economy looking to exports to provide the growth needed to get out of the debt quagmire.

The national economy is expected to shrink 3.0 percent or more this year while unemployment is running at a record 13.4 percent.

"The shoe sector is one of those helping the most to internationalize the economy and give it a boost," the external trade agency AICEP says.