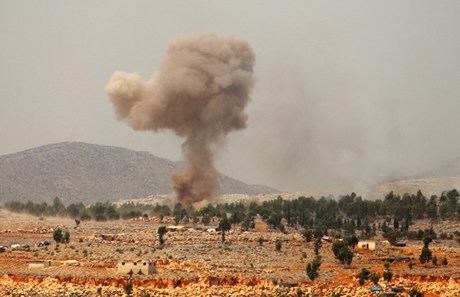 A drone strike believed to have been carried out by the United States in northwestern Syria killed a prominent Tunisian jihadist, a monitor said Tuesday.

The strike conducted Monday in the rebel-held province of Idlib killed Sayyaf al-Tunsi, said the Syrian Observatory for Human Rights.

"The drone targeted the vehicle of the Hurras al-Deen leader in Idlib, killing him," said Observatory chief Rami Abdel Rahman.

It is a rival of Hayat Tahrir al-Sham, an alliance of Islamist factions dominated by former members of Al-Qaeda's ex-Syria affiliate Jabhat al-Nusra -- although the two groups cooperate at times.

Sayyaf al-Tunsi was former Nusra leader who was sidelined over his alleged responsibility for the 2015 massacre of 20 Druze villagers in Idlib Province.

There was no immediate confirmation of the strike from the United States, nor the coalition it leads in the region to fight against the Islamic State jihadist group.

Rami Abdel Rahman said Tunsi's car was targeted by a so-called "Ninja" R9X missile, a modified Hellfire on which the explosive head is replaced with blades to minimise "collateral damage".

Use of the R9X missile is consistent with previous US air strikes against senior jihadists in northern Syria.