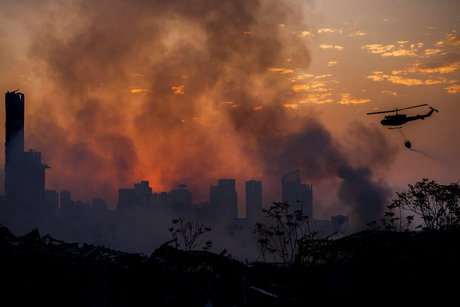 Beirut Bar Association chief Melhem Khalaf called on a judge investigating an explosion at the Lebanese capital's port to also inquire into a "worrying" port blaze that could have compromised evidence.

Security agencies are looking into what caused the huge fire that broke out on Thursday at the port, the site of a massive blast on August 4 that killed at least 190 people and ravaged swathes of the city.

Last week's blaze, which torched a warehouse containing vital food aid, caused a storm of speculation on social media from experts and activists over the possibility that it was sparked deliberately to tamper with evidence at the explosion site.

A probe into the blast was launched by Lebanese authorities in the wake of the disaster caused by the explosion of tons of ammonium nitrate left for years at the port, of which officials had long been aware.

Judicial Investigator Judge Fadi Sawan, who is leading the Beirut blast probe, dismissed the possibility that the fire was set to destroy evidence because it occurred outside an area designated by the judiciary as the zone of investigations into the explosion, a judicial source told AFP.

But Khalaf said he was still alarmed by the incident, especially as Thursday's blaze came only two days after a smaller fire had broken out at the port.

"Preserving the (blast) crime scene was the first thing we asked" of the probe, Khalaf told AFP on Monday.

"Investigative judge (Sawwan) should take over and carry on with investigations because... what happened is unacceptable and worrying."

The cause of last week's massive fire remains unclear, but outgoing minister of public works and transport, Michel Najjar, has said that welding works could have sparked the blaze in the port's duty free zone.

A security official told AFP that investigators were also considering the possibility Thursday's port fire was sparked deliberately as part of an insurance fraud scheme, but they have yet to find any evidence.

A judicial source said investigators have yet to establish a link between the port fire and the August 4 explosion and are treating the two cases separately.

But forensic expert Omar Nashabe said last week's fire should not be dismissed as irrelevant to blast investigations.

Sawwan should not overlook the "hypothesis that the cases are linked," he told AFP, calling the timing and setting of last week's fire "suspicious."

"The similarities in the two incidents... require that judge Fadi Sawwan links the two cases together," he added.