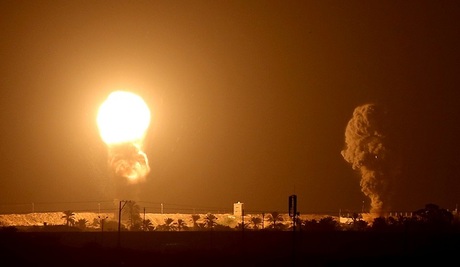 Israel bombed Gaza on Wednesday morning after militants fired rockets through the night, overshadowing the signing of landmark normalization deals with the United Arab Emirates and Bahrain in Washington.

Israeli Prime Minister Benjamin Netanyahu accused the militants of seeking to stop the peace deals, Israel's first with an Arab country since 1994.

But Gaza ruler Hamas warned Israel it faced an escalation if the bombing continued barely two weeks after a renewed Egyptian-brokered truce halted nearly nightly exchanges across the border through August.

The signing of the two agreements at a White House ceremony hosted by President Donald Trump prompted protest rallies across the Palestinian territories.

The deals broke with decades of Arab consensus that there would be no normalization of relations with Israel until it had made peace with the Palestinians and drew accusations of "betrayal" against the Western-backed Gulf states.

At least 15 rockets were launched from the Gaza Strip between 8 pm (1700 GMT) Tuesday and early Wednesday, nine of which were intercepted by Israeli air defenses, the military said.

The Israeli military said their fighter jets responded with air strikes on military targets belonging to Hamas, which controls the Gaza Strip.

There was no immediate claim of responsibility for the rocket fire from the various Palestinian factions operating in Gaza.

But Israel leveled blame at Hamas and warned that it would "bear the consequences for terror activity against Israeli civilians."

The rocket fire came as the United Arab Emirates and Bahrain signed accords establishing diplomatic relations with Israel and was aimed at derailing the deals, according to Netanyahu.

"They want to prevent peace, they won't. We will hit everyone who tries to harm us, and we will extend a hand of peace to all who reach out to us to make peace," the prime minister said in a statement.

The landmark agreements prompted demonstrations on Tuesday in both Gaza and the occupied West Bank.

Clutching Palestinian flags and wearing blue face masks for protection against coronavirus, demonstrators rallied in the West Bank cities of Nablus, Hebron and Ramallah, home of the Palestinian Authority.

Trump said the agreements "will serve as the foundation for a comprehensive peace across the entire region."

"After decades of division and conflict we mark the dawn of a new Middle East," he said.

Speaking later to reporters, he said Israel would enter into similar deals with up to nine other countries, including regional power Saudi Arabia.

Palestinian President Mahmoud Abbas warned that the deals would "not achieve peace in the region" until the U.S. and Israel acknowledged his people's right to a state.

"Peace, security and stability will not be achieved in the region until the Israeli occupation ends," he said.

Abbas warned that "attempts to bypass the Palestinian people and its leadership, represented by the Palestine Liberation Organisation, will have dangerous consequences."

In Gaza, protesters trampled on and set fire to placards bearing images of the leaders of Israel, the UAE and Bahrain.

Hamas has joined the Palestinian Authority in condemning the UAE and Bahraini accords as a "betrayal" of their cause.

The new rocket fire came after militants launched rockets and balloons fitted with incendiary devices across the border through much of August, drawing retaliatory Israeli air strikes.

Late last month, the two sides last month renewed an Egyptian-brokered truce under which Israel has allowed financial aid from the gas-rich state of Qatar to flow into impoverished Gaza, which has been under Israeli blockade since 2007.

It's about time that Israel told Hamas (and maybe Hizballah at the same time), for every rocket you fire into Israel, you'll get 100 back.

Why not just get rid of them once and for all? Now is the best time to do this as the world will be supportive. Stop talking about it and DO IT.

I like to make a distinction between the Palestinian leaders and the Palestinian population. That the leaders have failed Palestina is obvious, since 1948 , poor Palestinians have had bad leaders.
But it is as bad from our part if we don't recognise the tremendous tragedy the ordinary Palestinians lived and still experiencing since 1948, one of the biggest tragedy of modern history.

"But it is as bad from our part if we don't recognise the tremendous tragedy the ordinary Palestinians lived and still experiencing since 1948, one of the biggest tragedy of modern history."
Maybe this is because the Arab States including Lebanon have kept them locked up in camps, refused to allow them to work freely and of course refuse to allow them to integrate into midstream life by granting them citizenship and full rights.
Why do you think that over 50,000 West Bank Palestinians travel every day into Israel for work? Nobody forces them to, but they know that they can get work there and much high salaries than the PA controlled area can offer them.

go get em bibi - that's all they understand.